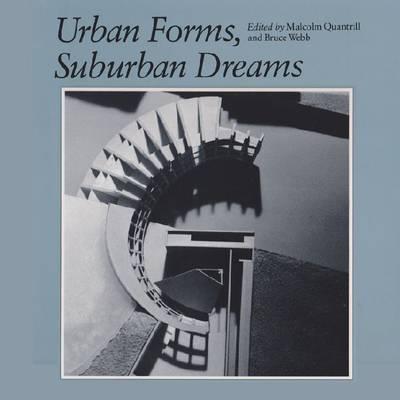 One of the primary tasks for architecture in today’s world is to create a sense of place, for the contemporary community-meshing urban density with suburban growth and change-is neither here nor there. Both urb (city) and suburb in our society challenge architects to conceive through social engineering and geometric design a sense of wonder in space. Between urban forms and suburban dreams, the volume editors write, lie many slippery paths, and we have trodden most of them in search of … lost utopias. Prominent scholars offer a variety of perspectives and insights that will be of value to architects, urban designers and planners, and others interested in the forms of life in our cities and suburbs. Peter Eisenman proposes that the media, tele-video especially, have dissolved all distinctions between the here and there, one place and another. Colin Rowe, on the other hand, sees the city as a distinct place, if different from the modernist formula vision; he believes it is a collage that can best be understood as a three-dimensional jigsaw puzzle. Kaisa Broner-Bauer’s account of the modernist city as a lost utopia poignantly traces the modern movement’s idealism to its nineteenth-century precursors and raises the question of what happened to the planners' brave new world. Diane Ghirardo looks at the architectural effects of the brave new world in fascist Italy. The case of entrepreneur-developer Gustave Ring, who designed space during the New Deal, is explored by Dennis Domer. Ring’s Arlington Village, near Washington, D.C., offers a thoughtfully landscaped semirural space that remains popular today. A contrasting scale and purpose is addressed in Marco Frascari’s study of Coral Gables, Florida. In his quest for wonder in architecture, he clarifies the deep spiritual responsibility of architecture, which cannot be fulfilled by mere technical dexterity or conjuring with words and geometric puzzles. These and related issues are further addressed by Drexel Turner and by Stephen Holl, both of whom focus on the special needs at the edge of the city; and by Bruce Webb and Martin Price, who examine the relationship between highway and place; by William H. Whyte, who turns to face the city’s center; and by Malcolm Quantrill, who explores the landscape between innocence and experience.