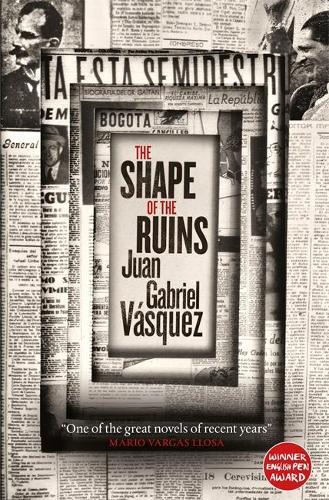 THE SHAPE OF THE RUINS by the Colombian writer Juan Gabriel Vasquez, whose recent novel, the best-selling SOUND OF THINGS FALLING won Spain’s Alfaguara Prize, Italy’s Von Rezzori Prize and the 2014 Dublin IMPAC literary Award, was published to acclaim in Colombia last year and has just appeared in Spain.
It takes the form of personal and formal investigations into two political assassinations - the murders of Rafael Uribe Uribe in 1914, the man who inspired Garcia Marquez’s General Buendia in ONE D YEARS OF SOLITUDE, and of the charismatic Jorge Eliecer Gaitan, the man who might have been Colombia’s J.F.K., gunned down on the brink of success in the presidential elections of 1948. Separated by more than 30 years, the two murders at first appear unconnected, but as the novel progresses Vasquez reveals how between them they contain the seeds of the violence that has bedevilled Colombia ever since. THE SHAPE OF THE RUINS is Vasquez’s most ambitious, challenging and rewarding novel to date.
$32.99Add to basket ›

END_OF_DOCUMENT_TOKEN_TO_BE_REPLACED

Considered by many to be the iconic French memoirist's defining work, The Years is a narrative of the period 1941 to 2006 told through the lens of memory, impressions past and present, cultural habits, language, photos, books,...

The Pine Islands is a serene, playful, profoundly moving story of the transformations we seek and the ones we find along the way.

A subversive, entertaining noir novel from the winner of the 2018 Man Booker Prize.

Intense, intelligent, and extraordinarily sensitive to the shape and weight of words, this remarkable debut presents a new way to count the cost of a pain that stretches across generations.

END_OF_DOCUMENT_TOKEN_TO_BE_REPLACED

The Death of Murat Idrissi

The Faculty of Dreams

Jokes for the Gunmen