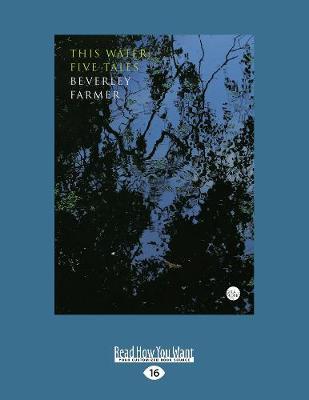 This is likely to be the last work by Beverley Farmer, one of Australia’s great prose stylists, and a pioneer of women’s writing, in her exploration of feminine concerns, and her use of different literary forms - novel, short story, poetry, essay, journal, myth and fairy tale. This Water is a collection of five tales, three of them novella length, each a fragmentary love story with a nameless woman at the centre, and a mythic dimension (Greek or Celtic, folklore or fable) rooted in the power of nature. Water and stone, ice and fire, light and darkness play an important role in all the stories, as do other motifs, closely related to women’s experience, blood, birth, possession and release, marriage and singularity. One tale, set on the south coast of Victoria, is animated by the legend of the Great Silkie, following Sylvia Plath and Joan Baez; another finds its rebellious princess in Lake Annaghmakerrig in Ireland; a third has Clytemnestra as its central figure, mourning the daughter sacrificed by her husband Agamemnon so that he can go to war with Troy. The stories contain and reflect and shadow one other: in each the women speak, act, think for themselves, in opposing or escaping from situations ordained by authority. Beverley Farmer is the author of three collections of short stories, including Milk, which won the NSW Premier’s Award for Fiction,the writer’s notebook A Body of Water, and two novels The Seal Woman and The House in the Light, which was shortlisted for the Miles Franklin Award. Her most recent book, The Bone House, a collection of three long essays on the life of the body and the life of the mind, was published by Giramondo in 2005.