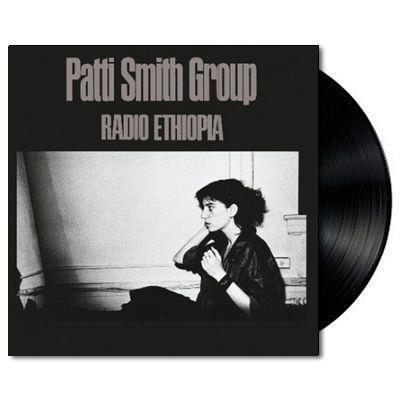 180gm Vinyl Reissue!
Punk rock’s poet laureate, Patti Smith ranks among the most influential female rock & rollers of all time. Ambitious, unconventional, and challenging, Smith’s music was hailed as the most exciting fusion of rock and poetry since Bob Dylan’s heyday.
Smith followed her own muse wherever it took her, from structured rock songs to free-form experimentalism, or even completely out of music at times. Her most avant-garde outings drew a sense of improvisation and interplay from free jazz, though they remained firmly rooted in noisy, primitive three-chord rock & roll.
Essentially the first art-punk album, Smith’s John Cale produced 1975 debut Horses offered unorthodox covers of party-rock tunes like “Gloria” and “Land of 1000 Dances” as well as a mix of original songs and lengthy, improv-driven spoken word pieces. Despite nonexistent airplay, it sold well enough to climb into the Top 50.
1976 follow-up, Radio Ethiopia, was credited to the Patti Smith Group, and placed some of Smith’s most straightforward rock songs (“Ask the Angels,” “Pumping (My Heart)” directly alongside some of her most experimental, free-form pieces (the title track).
180gm audiophile vinyl
$39.95Add to basket ›