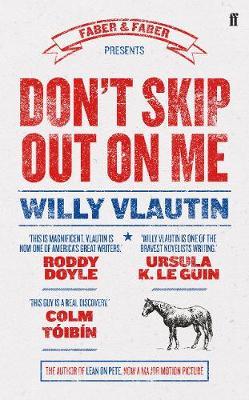 Meet Horace Hopper, a twenty-one-year-old farm hand in Tonopah, Nevada, who works for Mr Reece and his wife, the nearest thing he’s had to family in years.
But Horace, half-white half-Paiute Indian, dreams of bigger things. Leaving behind the farm and its fragile stability, he heads South to re-invent himself as the Mexican boxer Hector Hidalgo. Slowly, painfully, the possibility emerges that his dreams might not just be the delusions of a lost soul. but at what cost, and what of those he’s left behind?
Exploring the fringes of contemporary America, Don’t Skip Out on Me is an extraordinary work of compassion - a novel about the need for human connection and understanding - and essential reading, now more than ever.

Willy Vlautin is one of those dependable writers who has staked out his territory and is sticking to it. He writes about characters on the American fringe. People who are fighting a losing game against the system: orphans, drifters, war veterans, alcoholics. Although these characters are never clichés, Vlautin crafts them with idiosyncratic details, pulling them off the page and giving his novels real heft. Vlautin holds true to the maxim: write about people and their problems, not problems and their people.

Don’t Skip Out on Me is the story of Horace Hooper, a half Irish, half Paiute orphan who was left in the care of Arizona sheep farmers, Mr and Mrs Reese. Despite his gifts for ranch work, Horace dreams of becoming a champion boxer. He believes that the greatest boxers are Mexican, so he changes his name to Hector ‘Machine Gun’ Hidalgo, eats refried beans and burritos, studies Spanish in his spare time, and moves to Tucson to start training with a drunk named Ruiz. Hector establishes himself as a hard-hitting bawler whose ability to take a few punches quickly sees him dragged into the seedy world of small-time professional boxing.

Vlautin writes in understated prose. The boxing scenes in particular are satisfying in their sparseness, often lasting no more than a couple of pages. Some readers might find parts of the novel overly sentimental. But Vlautin wants to make you cry for his characters, and more often than not he succeeds. He is a master at crafting cruel twists of fate. And in this world bad choices seem all too easy to make. Be warned: the ending of this novel hits hard like a body shot.