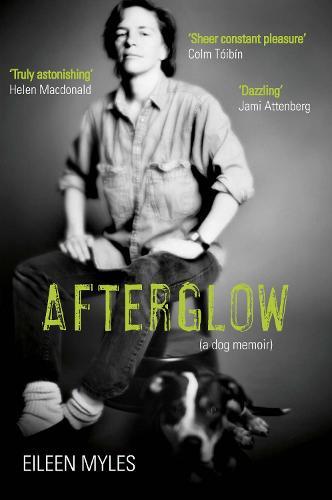 In 1990, Myles chose Rosie from a litter on the street, and their connection instantly made an indelible impact on the writer’s way of being. Over the course of sixteen years together, Myles was devoted to the pit bull and their linked quality of life. And starting from the emptiness following Rosie’s death, Afterglow launches a playful and incisive investigation into the mostly mutually beneficial, sometimes reprehensible power dynamics between pet and pet-owner. At the same time, it reimagines Myles’s experiences with alcoholism and recovery, intimacy and mourning, celebrity and politics, spirituality and family history, while joyously transcending the parameters of memoir.
Moving from an imaginary talk show where Rosie is interviewed by Myles’s childhood puppet, to a critical reenactment of the night Rosie mated with another pit bull; from shimmering poetic transcriptions of video footage taken during their walks, to Rosie’s final enlightened narration from the afterlife, this totally singular text combines elements of science fiction, screenplay, monologue, and lucid memory to get to the heart of how and why we dedicate our existence to our dogs.

Afterglow is the ‘memoir’ of Eileen Myles’ dog Rosie, a pitbull-cross who figures in Myles’ earlier work, particularly in sections of Inferno, where the poet describes halcyon months spent in upstate New York with her companion as a young dog. These were some of my favourite parts of Inferno, and so I was looking forward to reading Afterglow, more memorial than memoir.

It picks up in sadder territory, with Myles caring for her now sixteen-year-old friend who is dying, and has lost all control of her body. Myles explores how the persona she takes on while she is caring for her ailing dog is only part of the story of this relationship; the memoir opens with a letter from someone claiming to be Rosie’s lawyer, advising her that Rosie wishes to sue her owner for various abuses to herself and her kind. Later, in an interview with a puppet, Rosie admits she wrote the letter herself. This combination of the true with the wacky is true to Myles’ style in poetry and prose, with her knack for animating the world around her, filling unexpected things with warmth and love.

As the narrative moves away from the time of Rosie’s death, it gathers momentum and breadth, musing with curious insight on the relationships between humans and dogs and their significance culturally and emotionally. Afterglow becomes a book about how Rosie, seven years dead, continues to write the book of Myles. The final chapter is told in Rosie’s voice and is a reflection of the process at the book’s heart: the dog’s becoming human and the human becoming dog. At one point in Afterglow, Rosie claims the credit for most of Myles’ work from 1990 onward, an idea which is gently developed through the book into a view on the way relationships between humans and animals shape consciousness.

George Delaney is a children’s and YA specialist at Readings Kids.