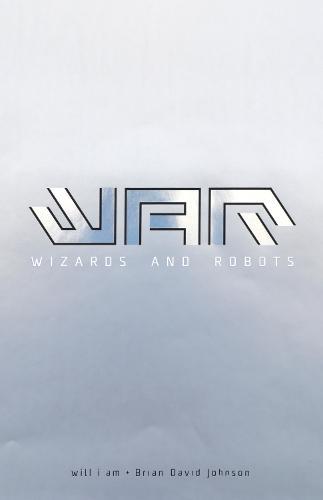 An explosive action-adventure novel created by will.i.am and renowned futurist Brian David Johnson.
Wizards are real, robots from the future are here, and the fate of our world rests in the hands of one unsuspecting teenager.
When a young man breaks into her home claiming her life is in danger, Ada Luring’s world changes forever. Geller is a wizard, on the run from his father’s hidden clan who want to kill Ada and her mother. Sara Luring is the scientist who will create the first robot, the wizards' age-old foes. But a robot has travelled back in time to find Ada, and will lay everything on the line to protect her, as she may just be the key to preventing the earth’s destruction in the future.
Ada, Geller and the robots must learn to work together to change the past and secure the future. But they don’t have much time before a mysterious enemy launches its attack on Earth…

In 1489 in what is now Slovenia, a wizard witnesses an entire army and the castle it’s defending being destroyed by ‘mechanical men’.

In 2052, in Gainesville, Florida teenager Ada and her small robot companion, Kipp, celebrate their mum making it as a finalist to the Rodin Challenge, a competition requiring entrants to create a robot that can surpass human intelligence. At the same time in the Pazin Caves in Croatia, Geller, a teenage wizard, wakes up from nearly 600 years of sleep and eavesdrops on his father’s plan to stop the rise of the mechanical men. In 3019, in Rio de Janeiro, Kaku, a research robot stood inside the damaged Christ the Redeemer statue scanning thousands of years of human history, trying to find a way to defeat the Spawn, the alien invaders who are destroying Earth.

There is a lot going on all around the world and all through time in Wizards and Robots but the authors are smart so, as a reader, you always know where and when you are. This is a book about time travel (among many, many other things) that will not leave you with a paradoxinduced headache. The inclusion of wizards and magic shouldn’t lead you to believe this is in any way a fantasy book, it’s straight up science fiction (for those in doubt, even Geller, the wizard from 1489, admits magic is just science you don’t understand yet). That being the case, I was slightly disappointed about the lack of hard science in this sci-fi book. In the preface the authors profess everything in this book is based on real science and technology; it would have been nice if they could somehow tie it to something recognisable from our present day.

This book is good for kids aged 11 and up, especially those with a budding interest in STEM.