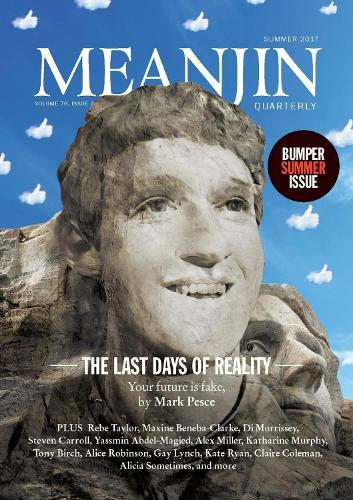 In the December 2017 edition of Meanjin, futurist Mark Pesce argues that we are entering an age in which it will be increasingly hard to determine what, if anything, in our universe of information and sensation, is actually real; and that’s not good news. For historian Rebe Taylor the discovery of a cache of Australian Aboriginal artefacts in an obscure British museum began an investigation that led back to the last years of Indigenous Tasmanians and the founding moments of the Victorian settlement; and from there to a consideration of the complex notion of ‘humane colonisation’. Yassmin Abdel-Magied recounts her many, failed, attempts to leave Australia; Di Morrissey considers Australia in Three Books; Maxine Beneba Clarke is lost for words at writers' festival question time; Steven Carroll reports from his writing desk; Indigenous writer Claire G. Coleman looks at the arrival of Europeans and asks- ‘just who are the nomads’?; while Lauren Rosewarne tries to find a feminist sub-category for the media mean girls. There’s a feast of fiction and poetry too in this bumper summer edition, with new stories from Gay Lynch, Alan Wearne, Raaza Jamshed Butt, John Morrissey and more.