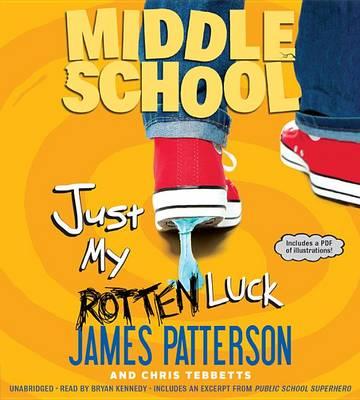 JUST MY ROTTEN LUCK - In this seventh Middle School episode, Rafe heads back to the place his misadventures began: the dreaded Hills Village Middle School, where he’s now being forced to take ‘special’ classes…He also finds himself joining the school’s football team - alongside his main tormenter, Miller the Killer! But Rafe has grand plans for a better year: First, he decides to start a super-secret art project that’s sure to rock the school. Then, if Rafe manages to make a play to save his team, he might have to deal with something completely new: popularity! I FUNNY - Jamie Grimm is a middle schooler on a mission: he wants to become the world’s greatest stand-up comedian - even if he always seems to ‘choke’ in the spotlight. When Jamie finds out about a contest called the Funniest Kid on the Planet, he knows it’s time to face his fears and enter. But are the judges rewarding him out of pity because he happens to be in a wheelchair, like his bullying cousin Stevie suggests[unk] And will Jamie ever share the secret of his troubled past - and reason for his disability - instead of hiding behind his comedy act?