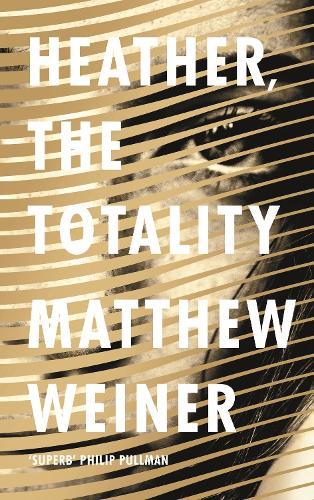 The Breakstone family arrange themselves around their daughter Heather, and the world seems to follow: beautiful, compassionate, entrancing, she is the greatest blessing in their lives of Manhattan luxury. But as Heather grows - and her empathy sharpens to a point, and her radiance attracts more and more dark interest - their perfect existence starts to fracture. Meanwhile a very different life, one raised in poverty and in violence, is beginning its own malign orbit around Heather.
Matthew Weiner - the creator of Mad Men - has crafted an extraordinary first novel of incredible pull and menace. Heather, The Totality demonstrates perfectly his forensic eye for the human qualities that hold modern society together, and pull it apart.

I was excited to read the first novel from Matthew Mad Men Weiner – not just because he’s the meticulous craftsman at the helm of one of my favourite screen stories, but because he’s often cited 1950s American literature (John Cheever, Richard Yates) as a key influence on Mad Men. Heather, The Totality proves that, like the writers he admires, Weiner can write a crisp, cold, beautifully wry sentence. His observations about class, gender relations, privilege and parenting are often sharply perceptive, and his prose is as devastatingly stylish as his sets. How’s this for a seductive opening? ‘Mark and Karen Breakstone got married a little late in life. Karen was nearly 40 and had given up on finding someone as good as her father and had begun to become bitter about the seven-year relationship she’d had after college with her former art teacher. In fact, when she was set up with Mark, she nearly turned the date down because Mark’s only prominent quality was his potential to be rich.’

The story of Karen and Mark’s Manhattan marriage and their perfect, perfectly beautiful daughter, Heather, who insidiously takes the place of each other in their affections, runs parallel to a less privileged one. Bobby, born to a New Jersey heroin addict and an unknown father, learns to use his background as leverage to get what he wants. The budding sociopath (a product of nature, nurture, or both?) graduates from torturing animals to sexual predation – and when he takes a job working on a construction site above teenage Heather’s apartment, she becomes a distant obsession; inevitably, their narratives will converge.

Weiner builds tension beautifully, and raises interesting questions about how personalities are shaped. Bobby and Heather are both canny observers of human nature, talented in moulding others to their will. This novella is somewhat flawed (the privileged narrative is more authentic than Bobby’s underdog), but fascinating. I look forward to Weiner’s next venture into print.