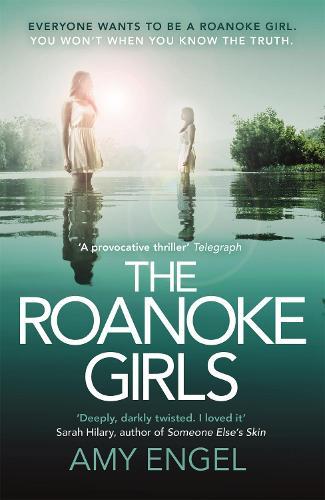 Beautiful. Rich. Mysterious. Everyone wants to be a Roanoke girl.
But you won’t when you know the truth.
Lane Roanoke is fifteen when she comes to live with her grandparents and fireball cousin at the Roanoke family’s rural estate following the suicide of her mother. Over one long, hot summer, Lane experiences the benefits of being one of the rich and beautiful Roanoke girls.
But what she doesn’t know is being a Roanoke girl carries a terrible legacy: either the girls run, or they die. For there is darkness at the heart of Roanoke, and when Lane discovers its insidious pull, she must make her choice…
The taboo-breaking thriller of the year, perfect for fans of Emma Cline’s The Girls.

The first adult novel from YA writer Amy Engel is an uneasy thriller set in the decaying grandeur of a rambling estate in Kansas. For three generations, the daughters of the Roanoke family have been small-town royalty for the dustbowl community of Osage Flats. Rich, beautiful and wild, their charmed lives conceal a closely guarded family secret: there is something rotten under the glamorous surface at Roanoke – something that invariably leaves the girls of the family dead or missing.

Engel’s novel begins with Lane, who – like her mother and her grandmother before her – is a Roanoke girl. Lane’s mother fled the family home as a pregnant teenager, and Lane has grown up oblivious to the dubious legacy of her name. After her mother’s suicide she is sent to live with her grandparents and despite her mother’s revulsion and fear, 16-year-old Lane is quickly wooed by the sprawling homestead, the freedom it entails, and especially by her charismatic grandfather, Yates. She’s inducted into her hedonistic new life as a Roanoke girl by her cousin Allegra, but over the course of one hot summer it becomes clear that her mother may have been right to flee.

Years later Lane still hasn’t recovered from her time in Roanoke, but when she receives a phone call telling her that Allegra has gone missing she knows that she has to return to Roanoke to assist with the search. The slowly unravelling narrative alternates between the first summer Lane and Allegra spent together, Lane’s search for her cousin, and the uneasy histories of Roanoke girls that came before them. If Virginia Andrews wrote Virgin Suicides, and set it in Manderley it would be something like The Roanoke Girls. This sun-scorched novel is a creepy gothic romance that leaves you feeling distinctly uncomfortable.