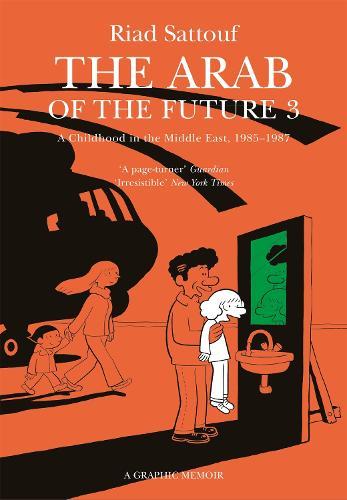 The highly anticipated continuation of Riad Sattouf’s internationally acclaimed graphic memoir.
After having followed her husband to Libya and then to Syria, Riad’s mother can’t take any more of village life in Ter Maaleh: she wants to go back to France. Young Riad sees his father torn between his wife’s aspirations and the weight of family traditions…

The Arab of the Future tells the story of Riad Sattouf’s childhood in the Middle East. The first volume covers the period from 1978 to 1984: from birth to the age of six, little Riad is shuttled between Libya, Brittany and Syria. The second volume tells the story of his first year of school in Syria (1984-1985). This third volume sees him between the ages of six and nine, the time he becomes aware of the society he is growing up in.

Can you celebrate Christmas in Ter Maaleh? Were there video clubs in Homs? How do children of eight fast for Ramadan? Was Conan the Barbarian circumcised? Were Breton villagers kinder to their animals than their Syrian counterparts? How far will Riad go to please his father? And how far will his father go to become an important man in the Syria of Hafez Al-Assad?