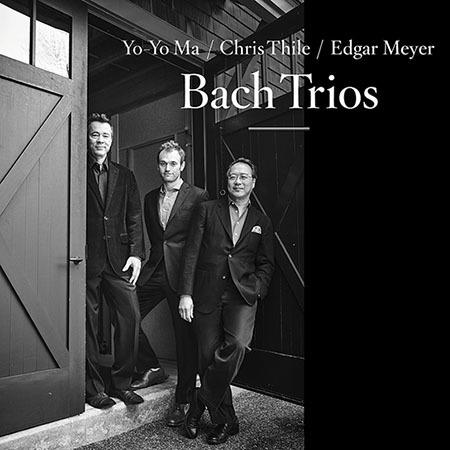 Nonesuch Records releases an album of Bach works recorded by cellist Yo-Yo Ma, mandolinist Chris Thile, and bassist Edgar Meyer. Bach Trios comprises works by J.S. Bach written for keyboard instruments, plus one sonata for viola da gamba.
In 2011, Ma, Thile, and Meyer-along with Stuart Duncan-collaborated on The Goat Rodeo Sessions, which won two Grammy Awards.
Yo-Yo Ma and Edgar Meyer’s first recording together was the 1996 album Appalachia Waltz; that album was followed by Appalachian Journey, in 2000. Meyer and Thile also began playing together nearly two decades ago, and have made two duo albums, 2008’s Edgar Meyer & Chris Thile and the Grammy-winning 2014 record Bass & Mandolin.
The New York Times said of Yo-Yo Ma, who is considered one of today’s foremost interpreters of Bach, “Other cellists hear Bach’s suites the same as Mr. Ma, but few if any have the technical means to transfer their imaginings so precisely into sound.”

For many people, the name Yo-Yo Ma immediately brings to mind the Bach Cello Suites and Ma’s bestselling album; the album that has defined many a young cellist’s ideas about the performance of the works. However, many discerning listeners also think ‘innovation’ when they hear or see his name, given the many different styles in which he performs and records on a regular basis. What I love about his new recording is this blend of traditional classical repertoire with a good dash of contemporary reimagining.

When Bach lived in Germany (1685–1750) it was normal and considered the highest form of flattery if someone took your idea and did something new and interesting with it. Bach himself borrowed heavily from his contemporaries, particularly for many of his teaching works, as can be seen in the ‘Anna Magdalena notebook’ written to help his wife learn keyboard.

Rejoining Ma are two of his frequent collaborators: Edgar Meyer on double bass and Chris Thile on mandolin. This trio has taken a number of Bach’s keyboard works and one lovely viola de gamba sonata to create a new Bach sound. It is apparent from the outset that not only are all three modern musicians at the top of their game, but that they work together seamlessly as a trio. Ma, Meyer and Thile each take an individual strand of melody from these complex works and interweave new tonal ideas.

Bach’s music can often be bogged down in a heavy polyphonic style of composition in which many voices are all trying to have their own say simultaneously. This can sound, to the untrained ear, like a bit of a mess of noise and notes. But in these recordings, with the lightness of the mandolin and both the string players’ gentle delight in the brightness of the melodies, each piece burbles along like a stream of music from some sort of Baroque heaven.