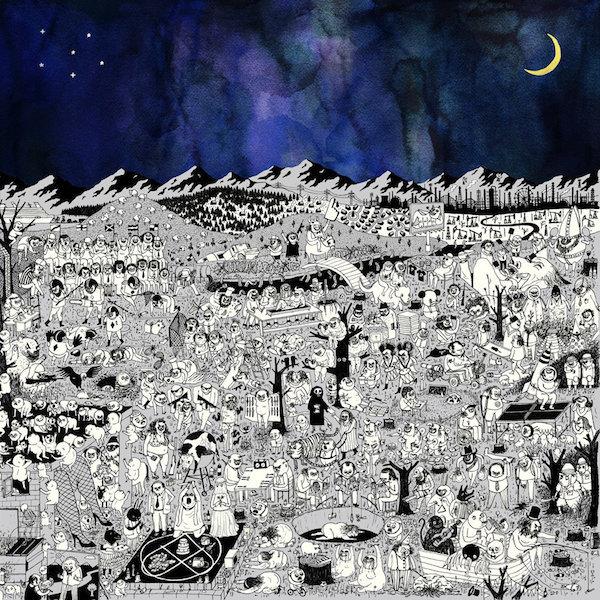 Father John Misty is the brainchild of singer-songwriter Josh Tillman, who many moons ago (2008-2012, to be precise) drummed for Seattle indie-folk act Fleet Foxes.
Fewer moons ago, he released his acclaimed albums Fear Fun (2012) and I Love You, Honeybear (2015), plus the recent “Real Love Baby” single, as Father John Misty, and contributed to songs by Beyoncé, Lady Gaga, and Kid Cudi.
Track listing:

‘The comedy of man starts like this: our brains are way too big for our mothers’ hips.’ The opening line to the epic title track on Father John Misty’s new album suggests Joshua Tillman has something on his mind and he’s gonna tell you about it. What follows is a brilliantly conceived litany of humankind’s foibles via Mother Nature’s cruellest twists, featuring more than a few laugh-out-loud moments.

Another highlight is the gorgeous, if somewhat tragic, ‘Ballad of the Dying Man’ in which Tillman’s hipster, cynic protagonist ‘eventually takes his final breath, but first checks his newsfeed to see what he’s about to miss’. The song features a truly lovely arrangement and wonderfully warm production, which carries through the record as a whole, further broadening the musical palette explored on his first two records in the guise of FJM.

The popular criticism of Tillman’s shtick is that it’s perhaps a little bit too convenient to lay the blame for the state of our world at the feet of some fairly obvious targets. I think to take this view is to completely miss the point. There is clearly more than a touch of Joshua Tillman in the characters he creates and anyone in doubt need only refer to 2015’s sublime I Love You, Honeybear, in which Tillman largely has the finger of blame pointed levelly at himself. Rather, Father John Misty is the conceit; the character through which he is free to loose the animal.

What’s happened to the humour in music today? Where are the Randy Newmans? Where are the Tom Waits? It’s a testament to Tillman’s satirical genius that he can make the listener guffaw in the face of what, ultimately, is some very dark material. There’s certainly no shortage of subject matter around and, hell, the truth hurts.