The Third Target / the First Hostage 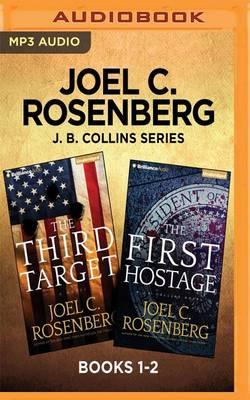 The Third Target / the First Hostage

THE THIRD TARGET The Islamic State, a dangerous al Qaeda offshoot also known as ISIS, is on the rampage. Already they have attacked two governments, brutally killing anyone who stands in their way. Now they have their sights set on a third target. But who will it be? The United States? Israel? Or someone else?When award-winning New York Times correspondent J. B. Collins hears rumorsthat ISIS has captured a cache of chemical weapons, he risks everything by sneaking into Syria to locate and interview the commander of the terrorist organization. Under intense pressure from multiple governments not to publish his findings, he faces a decision that could cost him his career-or his life.With the American president set to visit the region, the Middle East teeters on the edge of explosion.As a war-weary world hopes for peace, and a bloodthirsty terrorist regime grows in strength, who will prevail? Can Collins, with the help of a mysterious and beautiful Mossad agent, alert the world to the danger before ISIS can unleash its apocalyptic vision?Or with chemical weapons in the hands of radical Islamic jihadists, is it already too late?THE FIRST HOSTAGE New York Times correspondent J. B. Collins saw the horrific evidence with his own eyes. The brutal Islamist leader Abu Khalif has already demonstrated that he’s not afraid to unleash horrific destruction on his enemies. How many more will die before Khalif is stopped? With the president of the United States missing, the eyes of the world are on Jordan. ISIS is on the move. Amman is in flames. Brought into the inner circle of the king of Jordan, Collins is desperate to discover the fate of the president before it’s too late. But there’s a problem: someone is leaking secrets to ISIS. And Collins finds himself a prime suspect. Now he’s in a race to clear his own name in time to prevent the unthinkable. What he encounters along the way will change him forever. Deep in the tunnels beneath an ancient city, he will come face-to-face with the true nature of evil. Whether he can overcome it in time will determine the future of a nation…and the destiny of his own soul.