Last Hope Island: Britain, occupied Europe, and the brotherhood that helped turn the tide of war 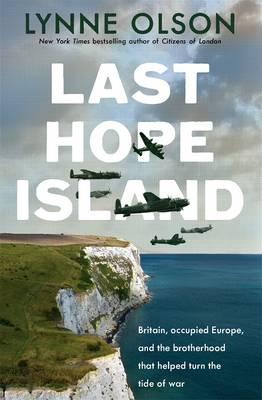 Last Hope Island: Britain, occupied Europe, and the brotherhood that helped turn the tide of war

When the Nazi blitzkrieg rolled over continental Europe in the early days of World War II, the city of London became a refuge for the governments and armed forces of six occupied nations - Belgium, Holland, Luxembourg, Norway, Czechoslovakia, and Poland - who escaped there to continue the fight. So, too, did General Charles de Gaulle, the self- appointed representative of free France. As the only European democracy still holding out against Hitler, Britain became known to occupied countries as ‘Last Hope Island’. In this epic, character-driven narrative, acclaimed historian and New York Times-bestselling author Lynne Olson takes us back to those perilous days when the British and their European guests joined forces to combat the mightiest military force in history and restore order to a broken continent. ‘Last Hope Island is a book to be welcomed, both for the past it recovers and also, quite simply, for being such a pleasant tome to read … Certain of these refugee groups have had their stories told before … but Olson’s book is the first to weave this all together … It’s a well-written and well-illustrated book, and deeply researched.’ - The Washington Post ‘In a series of compelling books in recent years, Lynne Olson has established herself as an authoritative and entertaining chronicler of perhaps the largest single event in human history - the Second World War. Now comes Last Hope Island, a powerful and surprising account of how figures from Nazi-occupied Europe found Great Britain an essential shield and sword in the struggle against Hitler. This is a wonderful work of history, told in Olson’s trademark style.’ - Jon Meacham, Pulitzer Prize-winning author of American Lion ‘Lynne Olson is a master storyteller, and she brings her great gifts to this riveting narrative of the resistance to Hitler’s war machine. You will be thrilled and moved - and enraged, saddened, and shocked - by the courage and steadfastness, human waste and stupidity, carelessness and nobility, of an epic struggle. Last Hope Island is a smashing good tale.’ - Evan Thomas, New York Times bestselling author of Being Nixon