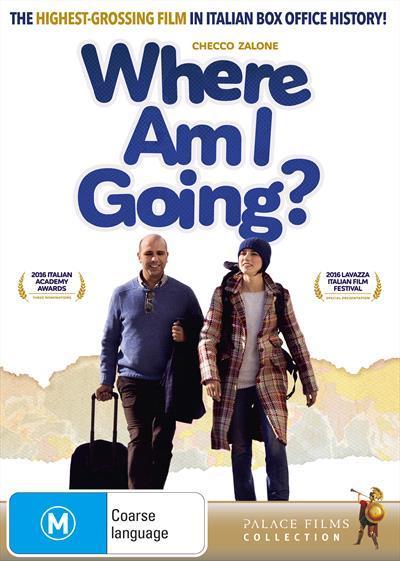 Not many films can boast the near equivalent of Star Wars: The Force Awakens' three-week ticket sales in its first weekend, but that’s exactly what Where Am I Going? achieved when it opened in Italy earlier this year.

Indeed, this hilarious comedy now stands as the highest-grossing film in Italian cinema history, earning an extraordinary 65 million+. The story takes a not-so-subtle dig at the Italian obsession of pursuing a cushy job-for-life in the public service, with its generous pension and the seeming impossibility of termination.
Co-writer Luca Medici stars as his much-celebrated comic character, Checco Zalone, a middle-aged slacker from Southern Italy who, thanks to the help of his father, is one of the privileged few with such a post. But change is in the air, and with a new reformist government vowing to cut down on bureaucracy, Checco is forced to go to great lengths to hold onto his pen-pushing role, sticking it out even if it means being sent to the North Pole or Africa. Love, however, just might be his undoing…
Striking a delicious balance between non-stop gags and some very pointed cultural criticism, the phenomenal success of Where Am I Going? is proof that 90 minutes of hilarity is the perfect antidote to the world’s doom and gloom.

South Italian slacker Checco (Checco Zalone) is 39 and still living at home. He’s sexist, selfish and happy with his lot in life, working idly in his cushy public service job. He is one of the privileged few with such a post, a ‘permanent position’ – all he’s ever wanted. But when a new reformist government steps in, vowing to cut down on bureaucracy, Checco is forced to go to extreme lengths to cling in to his pen-pushing role, even if it means being transferred out of spite, to places as far away from home as the North Pole. Then he meets the beautiful Valeria (Eleonora Giovanardi), a freethinking scientist who challenges Checco to choose between his old life or a new one with her and her children in Norway.

Quo Vado?, or Where Am I Going?, is a complete crowd pleaser. This feel-good Italian comedy has reportedly become the highest grossing Italian film of all time, smashing all box-office records. The film’s co-writer and leading man, Italian TV comedy star Checco Zalone is a cheerfully insensitive everyman here with a comic style that evokes Mr Bean, a milder Sacha Baron Cohen or a crasser Woody Allen.

The gags flow thick and fast. Most jokes seem to be at the expense of Italians themselves, as the story takes a not-so- subtle dig at the Italian obsession with pursuing a job-for-life with a generous pension and the seeming impossibility of termination. This colourful, fast-pace farce has been designed for local consumption rather than export, but despite the fact that the finer points of satire may be lost on Australian audiences, it’s easy to see why Where Am I Going? has been such a massive hit.