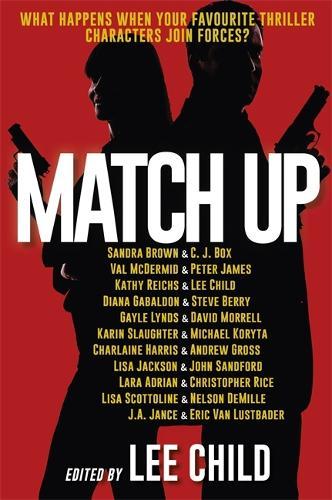 ‘A perfect book for the sun lounger … a delicious confection of fast-moving stories with emotional heart’ DAILY MAIL FOR THE FIRST TIME EVER … Lee Child’s Jack Reacher will team up with Kathy Reichs' Temperance Brennan to unmask a cunning killer. Val McDermid’s Tony Hill and Carol Jordan work with Peter James’s Roy Grace on a very unusual murder case. These are just some of the never-before-seen pairings in Match Up - a brand new collaboration between the world’s famous crime writers. Edited be international bestseller Lee Child, this exclusive page-turning anthology promises the same thrills and chills brought to you by the previous collection, Face Off. Read on for the full list of author and character pairings: Lee Coburn and Joe Pickett in Honor & … by Sandra Brown and C.J. Box Tony Hill and Roy Grace in Footloose by Val McDermid and Peter James Temperance Brennan and Jack Reacher in Faking a Murderer by Kathy Reichs and Lee Child Jamie Fraser and Cotton Malone in Past Prologue by Diana Gabaldon and Steve Berry Liz Sansborough and Rambo in Rambo on Their Minds by Gayle Lynds and David Morrell Jeffrey Tolliver and Joe Pritchard in Short Story by Karin Slaughter and Michael Koryta Harper Connelly and Ty Hauck in Dig Here by Charlaine Harris and Andrew Gross Regan Pescoli and Lucas Davenport in Deserves to be Dead by Lisa Jackson and John Sandford Lucan Thorne and Lilliane in Midnight Flame by Lara Adrian and Christopher Rice Bennie Rosato and John Corey in Getaway by Lisa Scottoline and Nelson DeMille Ali Reynolds and Bravo Shaw in Taking the Veil by J.A. Jance and Eric Van Lustbader