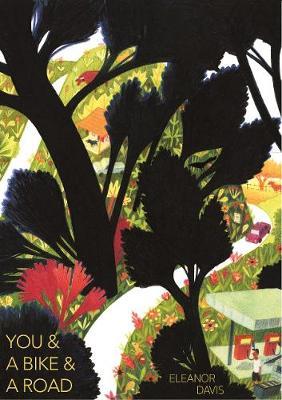 Eleanor Davis is without a doubt one of the top young cartoonists working today, and You & a Bike & a Road captures her talents in an incredibly raw and engaging way. The directness of this journal demonstrates just how effective and evocative a cartoonist Davis is. These are moments captured, but captured in an aesthetically profound way.
Davis' cycling trip will appeal to fans of autobiographical comics, road journals, cycling enthusiasts, and more. It is a snapshot of Davis at a certain period of the cartoonist’s life, but also a snapshot of America during an immensely turbulent time.
Davis has a classic New Yorker or mid-century illustrator style that will appeal to fans of James Thurber and UPA cartoons like Gerald McBoing-Boing. Even the loose, on the road style of You & a Bike & a Road is enviable in its beauty. Physical toll, sweeping vistas, small and large moments with strangers, Davis has made a documentary in comics form; its style equally matched by its substance.
$22.99Add to basket ›

END_OF_DOCUMENT_TOKEN_TO_BE_REPLACED

Travels with my Sketchbook