Rebel Cities: Paris, London and New York in the Age of Revolution 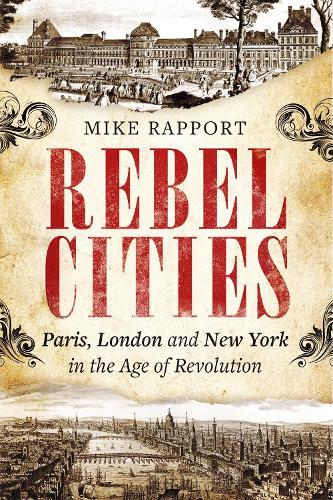 Rebel Cities: Paris, London and New York in the Age of Revolution

London, Paris and New York in the eighteenth century, as today, were places where political authority, commerce and money, art and intellectual life intersected. They straddled an Atlantic world where ships powered by nothing more than wind, currents and human muscle criss-crossed the sea, carrying with them goods, ideas and above all people: men and women, bewigged aristocrats and lawyers, articulate, rough-handed craftworkers, quill-wielding bluestockings and doughty fishwives. But the cities were also home to dangerous criminals, corrupt politicians - and slaves.

Rebel Cities explores the stormy debate about the nature of cities in the eighteenth and nineteenth centuries: were they places of enlightenment, sparkling wells of progress and civilisation, or were they dens of vice, degeneracy and disorder? Against a backdrop of accelerating urban expansion and revolution in both Europe and North America, writers, artists, moralists, magistrates, reformers and revolutionaries expended ink, paint, breath and, sometimes, blood in their struggle to understand, control and master the city.
When New Yorkers and Parisians experienced their revolution, when their cities went to war, and when Londoners engaged in political protest, they underwent the whole torrent and exhilaration of human emotions. Determining the character of the cities through their burghers, as well as their architecture, topography and the events that shaped them, this magnificent book evokes what it was like for all parts of society to live in London, Paris and New York in one of the most transformative periods in the history of civilisation.
$12.95Add to basket ›