A Nation Without Borders 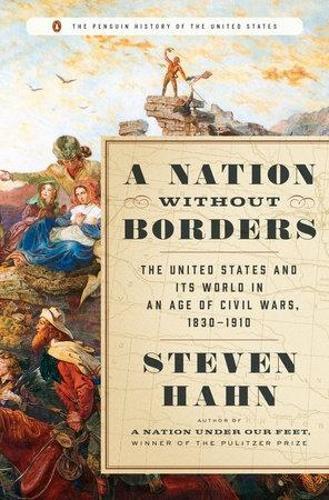 A Nation Without Borders

In this ambitious story of American imperial conquest and capitalist development, Pulitzer Prize-winning historian Steven Hahn takes on the conventional histories of the nineteenth century and offers a perspective that promises to be as enduring as it is controversial.
It begins and ends in Mexico and, throughout, is internationalist in orientation. It challenges the political narrative of “sectionalism,” emphasizing the national footing of slavery and the struggle between the northeast and Mississippi Valley for continental supremacy. It places the Civil War in the context of many domestic rebellions against state authority, including those of Native Americans. It fully incorporates the trans-Mississippi west, suggesting the importance of the Pacific to the imperial vision of political leaders and of the west as a proving ground for later imperial projects overseas. It reconfigures the history of capitalism, insisting on the centrality of state formation and slave emancipation to its consolidation. And it identifies a sweeping era of “reconstructions” in the late-nineteenth and early twentieth centuries that simultaneously laid the foundations for corporate liberalism and social democracy.
The era from 1830 to 1910 witnessed massive transformations in how people lived, worked, thought about themselves, and struggled to thrive. It also witnessed the birth of economic and political institutions that still shape our world. From an agricultural society with a weak central government, the United States became an urban and industrial society in which government assumed a greater and greater role in the framing of social and economic life. As the book ends, the United States, now a global economic and political power, encounters massive warfare between imperial powers in Europe and a massive revolution on its southern border?the remarkable Mexican Revolution?which together brought the nineteenth century to a close while marking the important themes of the twentieth.
$16.95Add to basket ›