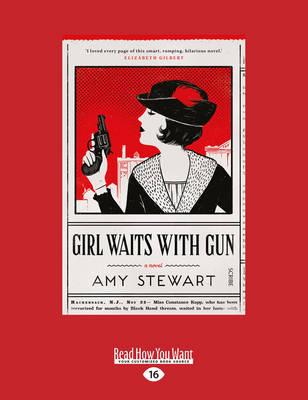 From the New York Times best-selling author of The Drunken Botanist comes an enthralling novel based on the forgotten, true story of one of the USA’s first female deputy sheriffs. Constance Kopp doesn’t quite ?t the mould. She towers over most men, has no interest in marriage or domestic affairs, and has been isolated from the world since a family secret sent her and her sisters from the city to the country fifteen years before. When a powerful, ruthless factory owner runs down their buggy, a dispute over damages turns into a war of bricks, bullets, and threats as he unleashes his gang on their farm. The sheriff enlists her help, and it turns out that Constance has a knack for outwitting (and disarming) the criminal element, which might just take her back out into the world and onto a new path in life. Through Amy Stewart’s exuberant storytelling, Constance Kopp catapults from a forgotten historical anecdote to an unforgettable historical-fiction heroine - an outsized woman not only ahead of her time, but sometimes even ahead of ours.