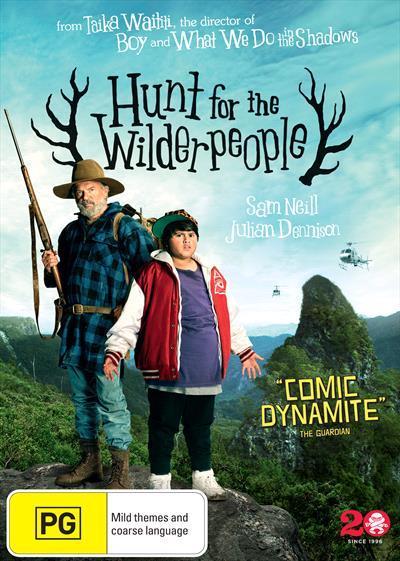 The story of misfit kid Ricky and his grumpy foster uncle Hec. The unlikely duo evade child services and the law by going bush…
Raised on hip-hop and foster care, defiant city kid Ricky gets a fresh start in the New Zealand countryside. He quickly finds himself at home with his new foster family: the loving Aunt Bella, the cantankerous Uncle Hec, and dog Tupac. When a tragedy strikes that threatens to ship Ricky to another home, both he and Hec go on the run in the bush. As a national manhunt ensues, the newly branded outlaws must face their options: go out in a blaze of glory or overcome their differences and survive as a family.

Hunt for the Wilderpeople is the fourth feature by Kiwi writer–director Taika Waititi (Eagle vs. Shark, Boy, What We Do in the Shadows). Ricky Baker is one foster house away from a juvenile detention centre. He is granted his last chance at a home when he is placed with two nomads, Bella (Rima Te Wiata) and Hec (Sam Neill), a couple who live self-sufficiently at the mouth of vast bush land, hunting wild pigs and birds for food.

Despite his social worker’s insistence that he’s a troublemaker, Ricky’s sharp intelligence is only limited by a childish naivety; his crimes are acts of petty rebellion like ‘loitering’ and ‘kicking things’. But it is obvious early on that Ricky’s lack of survival instincts and nagging curiosity pose a threat to Hec’s zen-like autonomy, and when the two are suddenly on the run in the wilderness from police, social services, and bounty hunters, Ricky and Hec must get along in order to survive.

The film is full of surprises, yet also pays homage to the likes of Terminator and Thelma & Louise. Julian Dennison’s Ricky has enough charm and personality to make Spielberg blush, and Neill’s tragic Hec is his best performance in many years.

Waititi’s sense of humour is a flirtation with opposites: innocence paired with slaughter; nurture with gross negligence; and Ricky’s softness and colourful dress with Hec’s grey roughness. Waititi is a sentimentalist (though it is his least sentimental film) and no matter the meanness of his antagonists, he always gives them a simulacrum of malice underpinned by doubt, a self-conscious misstep to endear each of them to you. His films have an exponential nature, each project expanding in production and scope, along with the director’s self-certainty. I can say with certainty that Wilderpeople is his BEST film, and one that you will want to watch over and over.