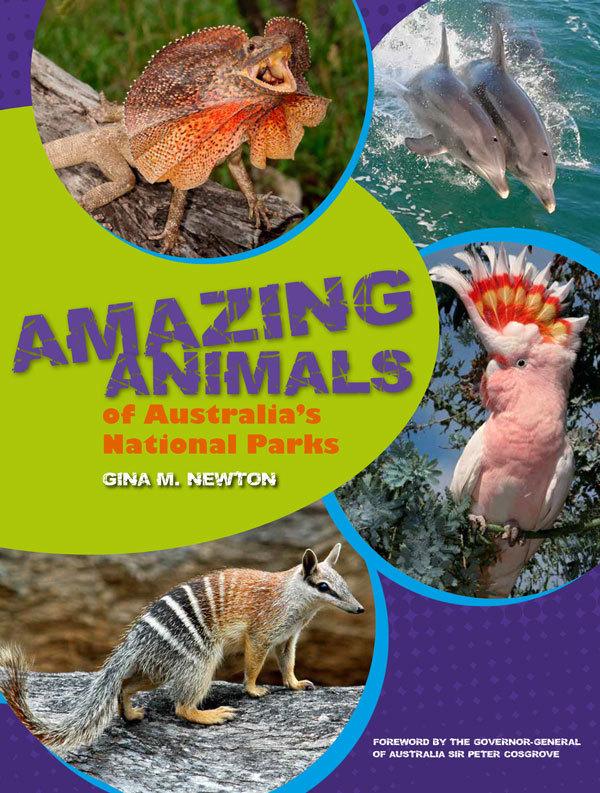 With its enticing and colourful design and its fascinating information, this is a book that children will want to pore over-either at home, in the classroom or on a road trip.
This book brings together 55 national parks, selected across all Australian states and territories, and over 120 animals. It is divided into seven sections according to habitat (woodlands and grasslands; forests; rainforests; arid zones; mountains; wetlands and waterways; coasts, oceans and islands), each including a number of national parks and a selection of the fish, reptiles, frogs, birds and mammals that inhabit them. At the end of the book is a section on ‘little critters'-beetles, spiders, butterflies, grasshoppers, bugs and so on.
Each habitat section opens with photographs of the featured national parks and a description of the habitat. Each animal has its own page, which has a stunning colour photograph of the species, a map of its distribution range, its conservation status and scientific information about the species. The information is divided into the following sections: ‘Fast Facts' gives you all the vital statistics, such as size, lifespan and number of young; ‘Where Does It Live?‘ tells you where in Australia you can find the species and provides details about its home; ‘What’s Its Life Like?’ tells you a bit about how the animal moves, behaves, eats and has young; and ‘Interesting Info' has quirky and fascinating facts.
$29.99Add to basket ›

Winners of the CBCA Book of the Year Awards 2017

Join Clancy and Uncle Egg on a rambling, rockhopping adventure in Gariwerd (the Grampians), to find the source of the Glenelg River. A story about following your flow, and the unexpected places you may go.

At Canteen Creek where we live, there are cheeky dogs everywhere. But when the cheeky goats, donkeys, buffaloes, and camels make mischief in the camp, the dogs just lie there until those pesky animals really go too far. Then the...

This book brings together 55 national parks, selected across all Australian states and territories, and over 120 animals.

What's the best fun in the whole village? Riding the patchwork bike we made! A joyous picture book for children by award-winning author Maxine Beneba Clarke.

END_OF_DOCUMENT_TOKEN_TO_BE_REPLACED

The Gigantic Book of Genes

There are shapes all around us, shapes that look like the letters of the alphabet. This book reveals this typographic illustration, known as letter art.

On this journey through the alphabet, you will encounter some of the world's most beautiful, rare and endangered animals from the majestic Amur Tiger of the Siberian plains to the shy Zebra Duiker from the rainforests of Africa.

Fabish: the Horse That Braved a Bushfire

A powerful and beautifully illustrated picture book based on the true story of a brave horse called Fabish, who saved a group of young horses during the Black Saturday bushfires.

This book brings together 55 national parks, selected across all Australian states and territories, and over 120 animals.

END_OF_DOCUMENT_TOKEN_TO_BE_REPLACED

Boomerang and Bat: The Story of the Real First Eleven

Chooks in Dinner Suits: A Tale of Big Dogs and Little Penguins