Colonial Settlements of New England: A Directory of over 1,000 Towns, Villages and Plantations During the American Colonial Period of 1607 - 1850 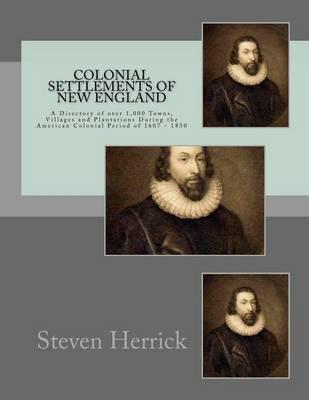 Colonial Settlements of New England: A Directory of over 1,000 Towns, Villages and Plantations During the American Colonial Period of 1607 - 1850

After many years of accumulating data about New England settlements, this resulting book provides a useful listing for genealogists or history aficionados that is organized by what would ultimately become the six New England States. Whenever possible, each settlement entry, alphabetized within the state, indicates the county, date of first settlement, name changes (cross-referenced and including Native American names in many cases), date of incorporation and some extraneous comments of interest. A typical sample in Massachusetts would be: Salem: Essex Co., Settlement in 1626 called Naumkeag, Inc. in 1629 as Salem . The next entry gives the reader information that helps differentiate between Salem and Salem Village, a common problem: Salem Village: Essex Co., Settlement in 1626 called Salem Village, Called Salem Village, a V. in Salem in 1629, Called Danvers a V. in Salem in 1752, Inc. in 1757 as Danvers . In addition to the directory of settlements, chronological sections at the beginning of each state listing give the reader a framework of the political events that affect the development and control over the settlements. The oldest timeline entry is shown under Maine: 1606: First Virginia Charter; Present-day Maine, from the Piscataqua to Kennebec Rivers was included as part of the 1606 First Virginia Charter granted to the Virginia Company of Plymouth. As we know, the Mayflower had an intended destination much further South but, as one historian put it, the Puritans ran out of beer off Cape Cod.