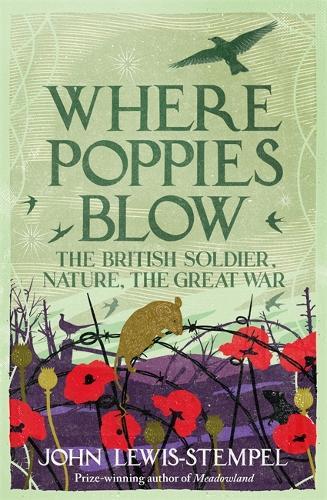 Winner of the Wainwright Golden Beer Prize 2017
The natural history of the Western Front during the First World War by the author of Meadowland, winner of the 2015 Wainwright Prize Where Poppies Blow is the unique story of the British soldiers of the Great War and their relationship with the animals and plants around them. This connection was of profound importance, because it goes a long way to explaining why they fought, and how they found the will to go on.
At the most basic level, animals and birds provided interest to fill the blank hours in the trenches and billets - bird-watching, for instance, was probably the single most popular hobby among officers. But perhaps more importantly, the ability of nature to endure, despite the bullets and blood, gave men a psychological, spiritual, even religious uplift.
Animals and plants were also reminders of home. Aside from bird-watching, soldiers went fishing in village ponds and in flooded shell holes (for eels), they went bird nesting, they hunted foxes with hounds, they shot pheasants for the pot, and they planted flower gardens in the trenches and vegetable gardens in their billets.
It is in this elemental relationship between man and nature that some of the highest, noblest aspirations of humanity in times of war can be found.
$51.99Add to basket ›

END_OF_DOCUMENT_TOKEN_TO_BE_REPLACED

Love of Country: A Hebridean Journey

The Running Hare: The Secret Life of Farmland

Traditional ploughland is disappearing. The corncrake is all but extinct in England. And the hare is running for its life. This book tells the story of the wild animals and plants that live in and under our ploughland, from...

Can Britain make room for wildlife? The author believes it can. In this book, he travels the length and breadth of the UK, from the remote archipelago of St Kilda to our inner cities, to witness at first-hand how our wild...

A powerful and beautifully written memoir from journalist Clover Stroud, about grief, motherhood, depression and the healing power of nature and horses.

END_OF_DOCUMENT_TOKEN_TO_BE_REPLACED

Love of Country: A Hebridean Journey

Foxes Unearthed: A Story of Love and Loathing in Modern Britain

The Running Hare: The Secret Life of Farmland

A Sky Full of Birds

Fingers in the Sparkle Jar