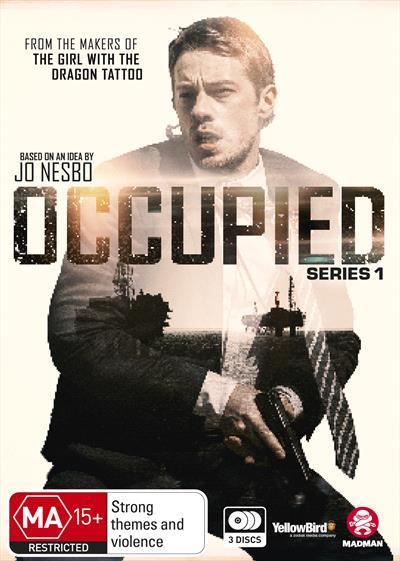 Following up on their environmental promises, the Norwegian government halts all oil production sending the country and the rest of the world into crisis.Unable to ignore the calls from the rest of the world to intervene, Russia, at the behest of the EU, stages a ‘silk-glove’ invasion - to secure the oil for the rest of the world. They have, they say, every intention of retreating once this has been accomplished. But events unfold that threaten to change all of this.
What happens when life seems to continue as normal and when life on the surface seems unchanged. When everyone gets to keep their lifestyle, all material things and the sense of security - will they rebel? Will they fight?
From the makers of The Girl with the Dragon Tattoo, Wallander and acclaimed crime writer Jo Nesbo, Occupied is Norway’s most successful and expensive television series ever made.

The North Sea is a cold and desolate place. Ice and snow and freezing cold seas await any one or thing foolish enough to cross its barren path. Things heat up, though, in the new Norwegian drama based on an idea by famed author Jo Nesbø.

The premise, without giving too much away, goes like this. In a not too distant future (this is definitely not science fiction!) the ruling Greens party in Norway has developed a new clean energy called Thorium. This new energy deems fossil fuels obsolete. All the oil and gas platforms in the North Sea and coal production are ceased and this progressive parliament is hailed for its environmentally friendly initiatives.

Of course the EU, which relies on these fossil fuels, has something to say about that. When talks stall, the EU sends in the Russians to act as negotiators and overseers. Tensions escalate, parliaments backpedal and splinter, the press has a field day and ordinary people come into the firing line. Heroes are born, friends become enemies, enemies become friends, and help is hard to find.

This 10-part series ends on a cliffhanger, so a second season is a lock. The cast is brilliant and, though the story can often require you to suspend your disbelief, you cannot help but find yourself getting sucked in to its fast paced, never ending ride of highs and lows. Another piece of superior television by those crafty Scandinavians.