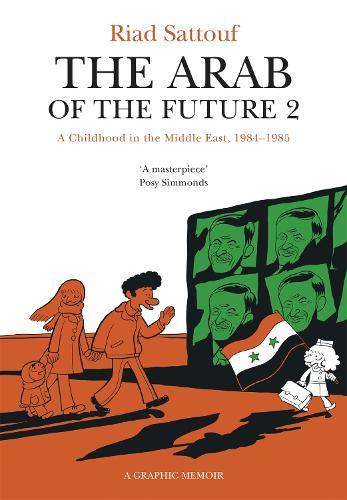 The first volume of Riad Sattouf’s The Arab of the Future introduced young Riad as his family shuttled back and forth between France and the Middle East.  Here is the continuation of his heart-rending, darkly comic story. Now settled in his father’s village of Ter Maaleh near Homs, Riad finally begins school, where he dedicates himself to becoming a true Syrian in the country of the dictator Hafez Al-Assad.
Told simply yet with devastating effect, Riad’s story takes in the sweep of Middle Eastern life of the 1980s, but it is steered  by acutely observed small moments: the daily sadism of his schoolteachers, the cruelty and vulnerability of his fellow students, and the obsequiousness of his father in the company of those close to the regime. And as the family strains to fit in, one chilling, barbaric act drives the Sattoufs to take the most dramatic of steps.
Immediate and gripping, The Arab of the Future 2 once again reveals the inner workings of a tormented country and a tormented family, delivered through Riad Sattouf ’s dazzlingly original graphic style.
Translated by Sam Taylor.
$37.00Add to basket ›