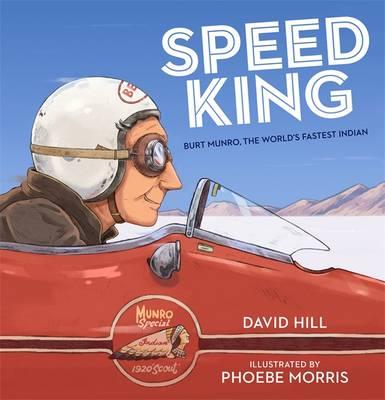 Meet Burt Munro, an unknown, elderly New Zealander whose obsession with setting a world land-speed record at Bonneville on his ancient Indian motorcycle made him a Kiwi legend. In 1967 an unknown, elderly New Zealander and his ancient Indian motorcycle set a world land-speed record at Bonneville. The man was Burt Munro, and he became a Kiwi legend. How did he do it? His amazing true story is now a stunning picture book. A crowd of people stand on a flat white plain. In the distance, a snarling, roaring dark speck is hurtling towards them. It’s a motorbike. The rider is inside the shell, lying almost flat. ‘Go, Burt!’ The red bike blurs past. Fingers click stop-watches. How fast has Burt Munro gone this time? The moment young Burt Munro saw a motorbike chugging down a quiet Invercargill street, he was hooked. More than fifty years later, he and his ancient Indian motorcycle would amaze the world by setting a land-speed record - one that remains unbroken to this day. Burt didn’t have much money. He wasn’t young. But he was determined. And he became a Kiwi legend. A wonderful true story about a very unlikely New Zealand champion, by the award-winning author and illustrator of First to the Top.