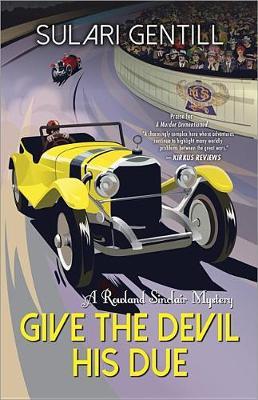 This adventure-packed romp threads between 1934 Sydney’s upper class and its seedy underworld. Wealthy Rowland Sinclair, an artist with leftist friends and a free-wheeling lifestyle, reluctantly agrees to a charity race. He’ll drive his beloved yellow Mercedes on the Maroubra Speedway, renamed the Killer Track for the lives it has claimed. His teammates are a young Errol Flynn and the well-known driver Joan Richmond. It’s all good fun. But then people start to die… The body of a journalist covering the race is found murdered in a House of Horrors. An English blueblood with Blackshirt affiliations dies in a Maroubra crash. Reporters stalk Rowly for dirt while bookmakers are after an edge. When someone takes a shot at him-it could be anyone. Then the police arrest one of Rowly’s housemates for murder. Meanwhile, the world is giving Hitler the benefit of the doubt, the Australian right rallies against Communists, and Rowly, fond of his German car and the German people, resolves to wake his world to the mounting horror of the Nazis he has experienced firsthand. Rowland Sinclair is again hurtling toward disaster with an artist, a poet, and a brazen sculptress along for the ride… Winner of the 2018 Ned Kelly Award for Best Mystery among other honors, Gentill’s mysteries will appeal to readers of Rhys Bowen, Kerry Greenwood, and Jacqueline Winspear