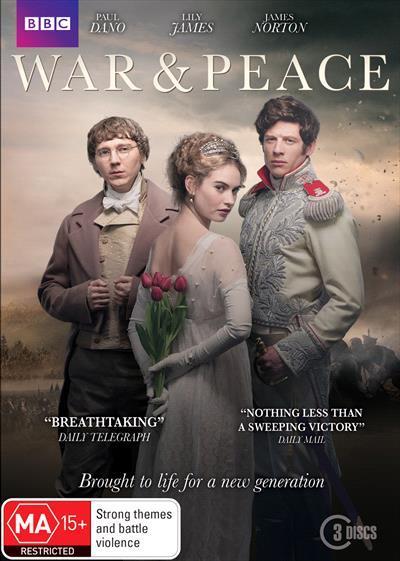 In 1805 when we first meet Pierre, Natasha , and Andrei , they are all part of St Petersburg’s glittering elite, but are fired-up with youthful ambition to find meaning in their lives. Kind-hearted but awkward Pierre, the illegitimate son of Russia’s richest man, wants to change the world for the better. Handsome and gallant Andrei, frustrated with the superficiality of his life, seeks a purpose, while the beautiful and spirited Natasha is searching for true love. At the same time Napoleon’s army edges ever closer to Russia’s borders. As everything they thought they knew is questioned, Pierre, Andrei and Natasha find themselves in a time when Russian society is about to change forever.

Tolstoy’s War and Peace is the classic of classics. Andrew Davies is perhaps the man most synonymous with adapting classics for the BBC. Davies brought us the yardstick by which every other Sunday night period drama will be forever judged, 1996’s Pride and Prejudice. It gives this new BBC 6-part adaptation of War and Peace a very high bar to clear, and I think it just does.

War and Peace opens on a misty romantic-looking field that, as it comes into focus, reveals an army amassing in the countryside. Napoleon is moving through Austria, and the Russians are standing with their Austrian allies. In this moment though, the Russian nobility is unconcerned. Russia hasn’t lost a war in a hundred years and nothing need change.

We are introduced to the main players in a drawing room, as young Pierre enters and disrupts the smooth order of things with his clumsiness. The Englishness of the cast is at first jarring. It sounds like Austen or Dickens with Russian names, but this soon works to the production’s advantage. It emphasises the disconnect between the Russian Court (which in the preceding 100 years had adopted French as its language, in an effort to be more European) and the Russian people. Many nobles were unfamiliar with their own language and wholly separate from their surrounds. Yet the outside world swoops in to dominate the action at every turn.

Pierre’s father dies, and Pierre unexpectedly inherits a noble title and fortune. The scene could be an eighteenth-century oil painting: dark, sumptuous, rich, and static. Later, as Pierre is betrayed, he flees through his new home into an empty ballroom as blinding as snow. Everywhere the immensity of Russia overwhelms. This is the achievement of this production: it brings to life the vast scope of war and peace as it presents these small players in a huge landscape.