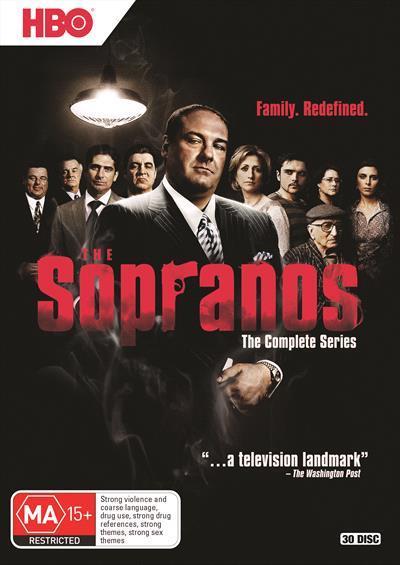 The complete series of The Sopranos
Tony Soprano tries to be a good family man on two fronts - to his wife, kids and widowed mother - and as a capo in the New Jersey mob. The pressures of work and family life give him anxiety attacks, so Tony starts seeing a psychiatrist; which is not the kind of thing a guy advertises in the circles Tony moves in - it could get him killed. So he keeps it to himself.
On the home front his marriage is shaky and his mother needs to be put in a nursing home (he calls it a “retirement community” but she still won’t go). Uncle Junior wanted to use Tony’s childhood friend’s restaurant to whack a guy named Pussy Malenga, but Tony prevented the hit by blowing the place up. When a Czech mob attempted to move in on the Sopranos' waste management business, Tony’s hot-headed nephew Chris “handled the problem” by murdering their representative and dumping him on Staten Island without getting the permission of the administration.
To top it all off, Tony is haunted by the feeling that the glory days of mob life are long gone, and that he might not measure up to the titans of the past.
$119.95Add to basket ›