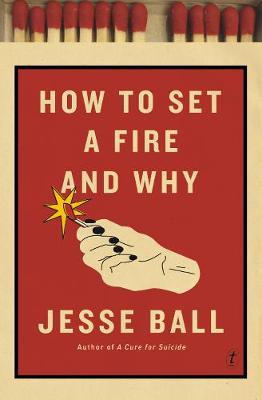 A startling, subversive novel about a teenage girl who has lost everything and will burn anything.
Fourteen-year-old Lucia is a young narrator whose voice will long ring in your ears. She is angry with almost everyone, especially people who tell her what to do. She follows the one rule that makes any sense to her: Don’t Do Things You Aren’t Proud Of.
Orphaned and living with her elderly aunt in poverty in the converted garage of a large mansion, Lucia makes her way through the world with only a book, a Zippo lighter, and a pocket full of stolen licorice. Expelled from school, again, Lucia spends her days riding the bus to visit her mother in The Home. When Lucia discovers a secret Arson Club, she will do anything to be a part of it. Her own arson manifesto is a marvellous anarchist pamphlet, written with biting wit and striking intelligence.
The voice of teenaged Lucia is a tour de force: a brilliant, wrenching cry from the heart and mind of a super-smart, funny girl who can’t help telling us the truth, a riveting chronicle of family, misguided friendship, and loss.
How to Set a Fire and Why is Jesse Ball’s most accessible novel yet; after Silence Once Begun and A Cure for Suicide, the pyrotechnics on display here will dazzle.

Midway through Jesse Ball’s novel How to Set a Fire and Why, the narrator, a fifteen-year-old girl called Lucia Stanton, takes a series of tests to see if she can be accepted into a prestigious school. After responding to an essay question, ‘Why Hitler?’ she’s put in front of a camera and asked to tell a joke. She hesitates for a moment, over-thinking things, before telling a story about an eagle that was killing local dogs while accidentally wearing a beanie it had lifted from one of its victims.

Lucia tells the story as a joke, but really it’s horrific, and it’s almost emblematic of the whole novel, in which we follow Lucia retaining a sense of humour while she’s moved to a new high-school after she stabbed a popular boy in the neck; while she lives in poverty in a garage with her aunt; and when her father is dead and her mother is now in a mental institution, where she spends most of her time staring silently at a fish pond.

Written as a straight narrative it would almost be too much to take, but the book is sectioned by asides, tests – Lucia is trying to get into an Arson Club – diagrams and predictions for the day which are followed by ‘What Happened’. As the elements stack up, the sadness at the heart of the book is slowly revealed.

For a young writer, Jesse Ball’s output has been incredibly prolific. We’re getting to the point where it’s almost impossible for him to release a bad book. His works, though wildly different, are always mysterious, puzzling and incredibly interesting. How to Set a Fire and Why is no exception.