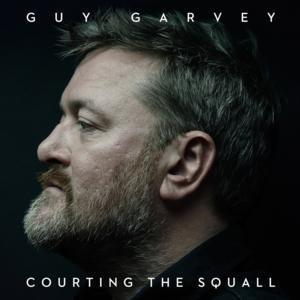 After nearly twenty five years and counting as a member of elbow and one of the UK’s most recognised and celebrated musicians and lyricists, Guy Garvey is setting off alone for the first time, with his debut solo album Courting the Squall.

The album features a band created by Guy from his ‘favourite musicians outside elbow’ and was driven by spontaneity and experimentation amongst the assembled players with Guy firmly and exclusively in the driving seat. The band ‘moved fast and drank a lot,’ focusing on live recording with minimal overdubs to create the songs. Unlike Elbow, where democracy has always ruled, this is an album where Guy embraced the freedom to do exactly what he felt throughout.

Courting the Squall is powered by influences and ideas that ‘don’t fit the elbow template.’ Some tracks, notably “Angela’s Eyes,” “Harder Edges” and “Belly of the Whale,” come completely from groove, finding a sweet spot between Manchester’s baggy past, long term love Tom Waits and Bowie’s mid-70’s albums, particularly “Sound and Vision.”

This change of type engendered a change of vocal approach, a clipped and more direct Garvey voice coming across, a hark back to his early days writing lyrics influenced by his listening to hip-hop where short delivery carries rhythm alongside meaning.