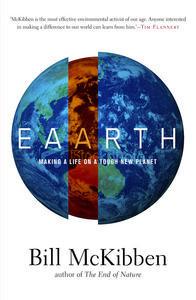 ‘What I have to say about this book is very simple- read it, please. Straight through to the end. Whatever else you were planning to do next, nothing could be more important.’ - Barbara Kingsolver, author of Animal, Vegetable, Miracle Twenty years ago, in The End of Nature, Bill McKibben offered one of the earliest warnings about global warming. Those warnings went mostly unheeded; now, he argues, we need to acknowledge that we’ve waited too long, and that massive change is not only unavoidable but already underway. Our old familiar planet is melting, drying, acidifying, flooding and burning in ways humans have never seen. We’ve created a new planet, still recognisable but fundamentally different. In Eaarth, McKibben surveys the changes already taking place and considers what they will mean for our future. Adapting to our new home won’t be easy. It will be expensive - and the natural resources on which our economy is built have been damaged and degraded. Our survival depends, McKibben argues, on scaling back, concentrating on essentials and creating the kinds of communities that will allow us to weather trouble on an unprecedented scale. Change - fundamental change - will be our best hope on a planet suddenly and violently out of balance. ‘Bill McKibben foresaw 'the end of nature’ very early on, and in this new book he blazes a path to help preserve nature’s greatest treasures.‘ - James E. Hansen, director, NASA Goddard Institute for Space Studies

END_OF_DOCUMENT_TOKEN_TO_BE_REPLACED

In The End of Nature, Bill McKibben offered one of the earliest warnings about global warming. Those warnings went mostly unheeded; now, he argues, we need to acknowledge that we've waited too long, and that massive change is...

Deep Economy: The Wealth of Communities and the Durable Future

Contending that more is not better for consumers, bestselling author McKibben offers a realistic, if challenging, scenario for a hopeful future. For those who wonder if there isn't more to life than buying, he provides insight on...

Fight Global Warming Now: The Handbook for Taking Action in Your Community

Hurricane Katrina. A rapidly disappearing Arctic. The warmest winter on the American East Coast in recorded history. This title provides the facts of what must change to save the climate and show how to build the fight in your...