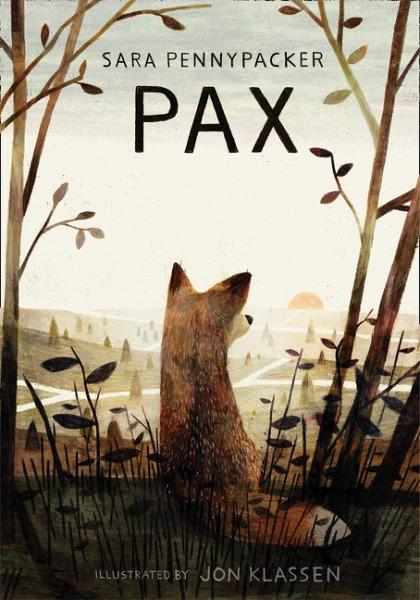 A moving story of the extraordinary friendship between a boy and his fox, and their epic journey to be reunited. Beautifully illustrated by multi-award winner, Jon Klassen.

Pax was only a kit when his family was killed and he was rescued by ‘his boy', Peter. Now the country is at war and when his father enlists, Peter has no choice but to move in with his grandfather. Far worse than leaving home is the fact that he has to leave Pax behind. But before Peter spends even one night under his grandfather’s roof he sneaks out into the night, determined to find his beloved friend. This is the story of Peter, Pax, and their journeys back to each other as war rampages throughout the country.
A profound and moving story with stunning illustrations by award-winning illustrator, Jon Klassen, ‘Pax' is destined to become a classic in the vein of ‘Charlotte’s Web' and ‘Watership Down'.

Pax is a timeless, moving story of the unbreakable bond of friendship between an animal and a child in the tradition of Lassie Come Home. It is also a beautiful hardcover book with stunning illustrations from talented artist Jon Klassen that begs to be held close.

Not long after his mother dies, 12-year-old Peter discovers a mother fox that has been hit by a car at the side of the road. When he finds her babies, he takes the only surviving kit to rear as his own and names him Pax. The two are tightly bonded until the day Peter’s father is called to war. The boy must live at his grandfather’s house and Pax must be released into the woods to become a wild animal again.

But the love between boy and fox is strong and they each determine to find one another, setting off on a perilous journey. The worlds of both boy and fox are authentically portrayed through chapters written in alternating voices as they encounter danger and obstacles along their path. Pax is destined to become a contemporary classic that will be enjoyed by animal lovers aged 10 and up.

The best books to read aloud to older kids

The Tales of Mr Walker

Time Travelling with a Hamster

The Smell of Other People’s Houses