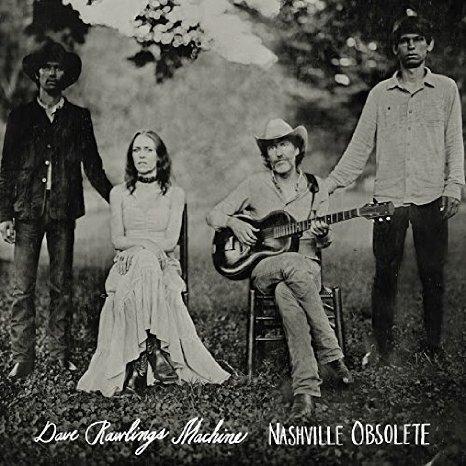 Recorded on analog tape at Woodland Sound Studios in Nashville, TN, ‘Nashville Obsolete’ features seven original compositions written by Gillian Welch and Dave Rawlings. Produced by Rawlings, ‘Nashville Obsolete’ highlights the brilliant musicianship of Dave Rawlings and Gillian Welch on lead vocals and guitar, Paul Kowert (Punch Brothers) on bass, Willie Watson on vocals and guitar and guest appearances from Brittany Haas (fiddle) and Jordan Tice (mandolin).
Nashville Obsolete marks the 7th studio album on which Welch and Rawlings have collaborated together in their acclaimed two decade long creative partnership, including their most recent offering, the Grammy nominated Gillian Welch release ‘The Harrow And The Harvest’ (2011), the 2009 Dave Rawlings Machine release ‘A Friend Of A Friend’ - which MOJO hailed as “the best Americana debut of the year” in their 4-star review - and the 2001 Gillian Welch masterpiece ‘Time (The Revelator).’

Upon first listen, Nashville Obsolete gives the impression of a simpler, stripped back version of the duo. Listen again. Rich, layered rhythms are punctuated by lush string arrangements that highlight the sheer beauty and majesty of the seven cuts on offer here. In the past you could be excused for thinking there were a few too many flourishes of Rawlings’ trademark guitar playing and although he again engages in some wonderful picking, you feel like the thought process was a little more, ‘OK! Enough playing, let’s put some strings in here!’ In my opinion, his instincts were just right and clearly so from the opening track, ‘The Weekend’. The beautiful balance between guitar and strings (and Gillian Welch’s occasional drumming) lends itself perfectly to the rawness of Rawlings’ vocals mixed with the beautiful harmonies created by Welch. In fact, the harmonies between these two have never sounded better. Smooth as silk and as rich as syrup, this is as good as it gets. Tales of ordinary people living dramatic lives sometimes lean towards the epic with songs spanning up to eleven minutes. No matter. These mythical tales of American life are best performed by those with an understanding of their timeless quality. Dare I say that this could be as good as these two have ever been?