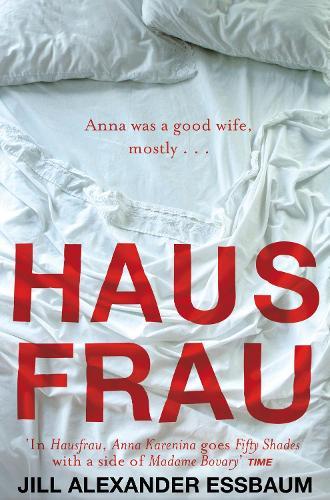 Haunting and elegant, Hausfrau is the exceptional debut novel from the prize-winning American poet, Jill Alexander Essbaum.
Anna was a good wife, mostly…
Anna Benz lives in comfort and affluence with her husband and three young children in Dietlikon, a picture-perfect suburb of Zurich. Anna, an American expat, has chosen this life far from home; but, despite its tranquility and order, inside she is falling apart.
Feeling adrift and unable to connect with her husband or his family; with the fellow expatriates who try to befriend her; or even, increasingly, her own thoughts and emotions, Anna attempts to assert her agency in the only way that makes sense to her: by engaging in short-lived but intense sexual affairs.
But adultery, too, has its own morality, and when Anna finds herself crossing a line, she will set off a terrible chain of events that ends in unspeakable tragedy. As her life crashes down around her, Anna must then discover where one must go when there is no going back …

From acclaimed poet Jill Alexander Essbaum comes this debut novel, Hausfrau. She brings with it her poetic inclinations: passages are fleeting, moving through past and present, but measured and curated with care. The experiences of her troubled heroine, Anna, are met with simile, and often-lovely figurations.

Anna is a housewife (hausfrau: house woman), an American expat who married a Swiss banker, and who has lived for nine years in suburban Zürich. After years of foreignness and Swiss tourism, Anna has begun a German language class – she is ready to communicate, to make friends, to make it work. In the class she meets Archie, a Scotsman, and they begin an affair, but as her story unfolds we realise that Archie is neither the first nor the last of Anna’s lovers.

Essbaum conjures literature’s most notorious affairs; Anna Karenina’s fate and Madame Bovary’s demise may sit, however implicitly suggested, at the foreground of the reader’s mind. For me, Lessing’s Anna, of The Golden Notebook, presented herself, and occasionally, the sorrowful, tender Laura Jesson of Noel Coward’s Brief Encounter.

Essbaum’s Anna, however, is not a literary person, and her points of reference – meted out in an ongoing conversation (or match) with her psychoanalyst – are abstract and philosophical. Anna is very emotional but withdrawn, her feelings are far from the surface and no human interaction can draw her out. Yet she breaks pieces off and gives herself away; her heart handed over like ‘an open wallet to a thief’.

The non-linear narrative and the strange dialogue in scenes with the shrink present the book’s only real hurdles. It is a sometimes funny, sometimes sexy read and it will ring true for many family women. It will also open up a library of references for literary readers. Hausfrau denotes a very promising transition from Essbaum.