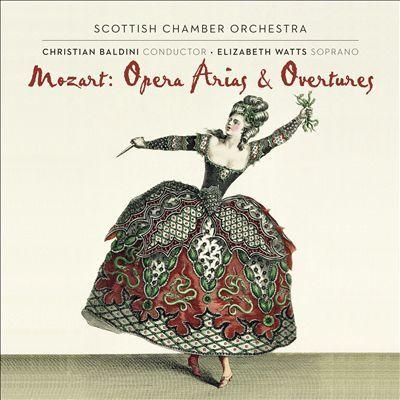 The Scottish Chamber Orchestra has established impeccable Mozartian credentials with its award-winning discography, to which Mozart: Opera Arias and Overtures is the latest addition.
The SCO’s previous forays into operatic repertoire (Handel with soprano Emma Bell and Mozart, Haydn & Cimarosa with baritone William Berger) have been highly critically acclaimed.
This recording features a hand-picked selection of arias from six of Mozart’s much-loved operas, alongside their respective overtures.
The SCO’s affinity with Mozart’s music is demonstrated with perfect eighteenth-century style in the overtures; whilst the arias see the orchestra lend characterful support.
Award-winning soprano Elizabeth Watts has performed in Don Giovanni at Covent Garden, Così fan tutte for Glyndebourne on Tour and Le nozze di Figaro for Santa Fe Opera and Welsh National Opera; she utilises her experience to create memorable performances.
A love of Mozart inspired conductor Christian Baldini to make music his career so it is fitting that his recording debut with the SCO features repertoire that is so close to his heart.
With a voice described as ‘one of the most beautiful Britain has produced in a generation' (IRR), Elizabeth Watts has established herself as ‘one of the brightest new talents' (The Independent).
Watts won the 2006 Kathleen Ferrier Prize and the Rosenblatt Recital Song Prize at the 2007 BBC Cardiff Singer of the World Competition.
In 2014 Watts performed in London’s most prestigious venues including the Royal Opera, Covent Garden; the Festival Hall and at the Last Night of the Proms in the Royal Albert Hall.
Christian Baldini is a dynamic artist with a ‘keen ear for detail' (The Scotsman). He regularly conducts several international orchestras including the SCO, and opera for the Aldeburgh Festival.
The Scottish Chamber Orchestra is a world-renowned orchestra with an outstanding reputation for Mozart.

END_OF_DOCUMENT_TOKEN_TO_BE_REPLACED

The music of Frédéric Chopin has been recorded hundreds of times before. But never like this. The Chopin Project brings together award-winning young Icelandic pop/classical musician Ólafur Arnalds and the...

The Scottish Chamber Orchestra has established impeccable Mozartian credentials with its award-winning discography, to which Mozart: Opera Arias and Overtures is the latest addition.