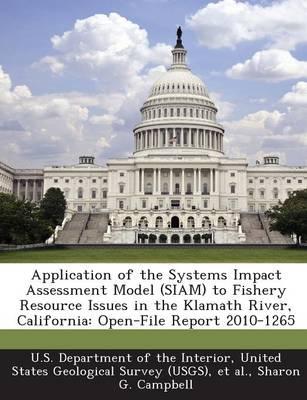 At the request of two offices of the U.S. Fish and Wildlife Service (FWS) located in Yreka and Arcata, Calif., we applied the Systems Impact Assessment Model (SIAM) to analyze a variety of water management concerns associated with the Federal Energy Regulatory Commission (FERC) relicensing of the Klamath hydropower projects or with ongoing management of anadromous fish stocks in the mainstem Klamath River, Oregon and California. Requested SIAM analyses include predicted effects of reservoir withdrawal elevations, use of full active storage in Copco and Iron Gate Reservoirs to augment spring flows, and predicted spawning and juvenile outmigration timing of fall Chinook salmon. In an effort to further refine the analysis of spring flow effects on predicted fall Chinook production, additional SIAM analyses were performed for predicted response to spring flow release variability from Iron Gate Dam, high and low pulse flow releases, the predicted effects of operational constraints for both Upper Klamath Lake water surface elevations, and projected flow releases specified in the Klamath Project 2006 Operations Plan (April 10, 2006). Results of SIAM simulations to determine flow and water temperature relationships indicate that up to 4 degrees C of thermal variability can be attributed to flow variations, but the effect is seasonal. Much more of thermal variability can be attributed to air temperature variations, up to 6 degrees C. Reservoirs affect the annual thermal signature by delaying spring warming by about 3 weeks and fall cooling by about 2 weeks. Multi-level release outlets on Iron Gate Dam would have limited utility; however, if releases are small (700 cfs) and a near-surface and bottom-level outlet could be blended, then water temperature may be reduced by 2-4 degrees C for a 4-week period during September. Using the full active storage in Copco and Iron Gate Reservoir, although feasible, had undesirable ramifications such as earlier spring warming, loss of hyd