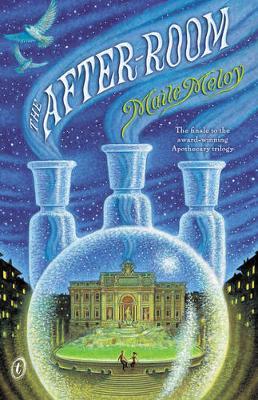 ‘I’ve been calling it the After-Room,’ Benjamin said. ‘But it’s not really a room. The walls aren’t really walls, they’re like a screen, and beyond is something else. Something farther. My father is there. I think he’s keeping himself in that place, somehow. He’s stalling, so he can communicate with me. Does that sound stupid?’ Janie shook her head. It sounded terrifying, but also somehow wonderful. It’s 1955, and Benjamin Burrows and Janie Scott are trying to live a safe, normal life in America. But soon the advice of a mysterious, unscrupulous magician propels Janie and Benjamin into danger, and towards the land of the dead. Meanwhile, their friend Jin Lo washes up on a remote island with an American spy and finds herself on the trail of a deadly nuclear threat. She’s on the other side of the world and she needs help - how will Janie and Benjamin reach her? The triumphant finale in the trilogy that began with Maile Meloy’s bestselling, critically acclaimed The Apothecary, and continued in its captivating sequel, The Apprentices, The After-Room is full of enchantment and heart, with Ian Schoenherr’s stunning illustrations throughout.