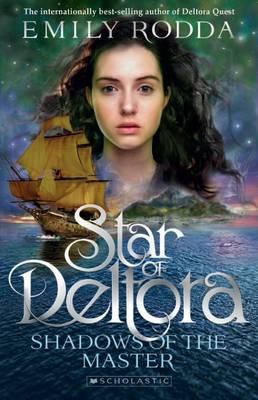 Britta has always wanted to be a trader like her father, sailing the nine seas and bringing precious cargo home to Del harbour. Her dreams seemed safe until her father’s quest to find the fabled Staff of Tier ended in blood and horror. Now his shamed family is in hiding, and his ship, the Star of Deltora, belongs to the powerful Rosalyn fleet. But Britta’s ambition burns as fiercely as ever.When she suddenly gets the chance to win back her future she knows she has to take it - whatever the cost. She has no idea that shadows from a distant, haunted isle are watching her every move.

As a young girl in a post-Shadow Lord Deltora, Britta has two choices – work in her mother’s shop, exiled to the outskirts of her village, or fulfil her lifelong dream of becoming a Trader and sailing the Star of Deltora, the finest ship in Del. Ignoring her mother’s pleas, and with the enthusiastic encouragement of old Captain Gripp, Britta enters herself in the centuries-old competition for young girls to become apprenticed to the Trader Rosalyn, the most famous trading empire in the lands. Among her competition are foreigners Sky of Rithmere and tall, dark Jewel of Broome; and Vashti, the daughter of a local trader, who has been trained for the position since birth. With her father’s shadowy past hanging over her Britta will need to work even harder than her fellow contestants to win the right to the Star of Deltora.

Shadows of the Master is the first book in the Star of Deltora series. It is the beginning of many adventures for both Britta and us. In the books to come it is suggested that Britta may sail to the island of Dorne from the Three Doors trilogy and possibly even as far as the ocean of the Maris from the Rowan of Rin series. As a huge, long-time fan (22 years!) of all the Deltora books I cannot think of anything more exciting!

END_OF_DOCUMENT_TOKEN_TO_BE_REPLACED

The Cow Tripped Over the Moon

Cleo's best friend is away, her parents are busy, and there's nothing to do but count raindrops - or tidy her room. Just when she thinks she'll never cheer up, Cleo has an idea.