Career as an Editor 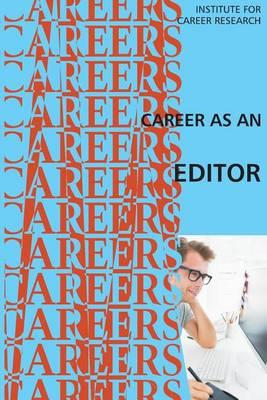 Career as an Editor

WITH FINGERS DASHING ACROSS THE keyboard, editors can transform mediocre writing into epic prose. They can take a forgettable jumble of words and turn them into literary jewels. Wherever there is good writing - books, magazines, newspapers, websites - there are editors working in the background. For their efforts, editors get no byline at the beginning of the story or credit on the title page. They are never asked to autograph a written piece of work they have helped create. Only rarely will an editor’s name appear in the masthead of a newspaper or magazine. Occasionally an editor’s name may be mentioned in the acknowledgment of a book. Otherwise, they work in complete anonymity. So why do editors take on this seemingly thankless task of refining the writing of others? Because they hate to see words misused, grammar mangled, and sentences run on forever. For those who appreciate the written word, editors are unsung heroes. Editing is a specialized talent that is honed to perfection through years of experience. Top editors literally know everything there is to know about the written word. They approach their work like highly skilled surgeons, except that editors are looking to cure the ills of manuscripts, rather than patients. Most writers would prefer not to alter a single word in their manuscript. They are simply too close to the work. So an editor takes an objective look at the text, spots flaws, and corrects them. Though writers rarely admit it, they appreciate the work of a good editor who takes a manuscript and makes it better, stronger, tighter. In their jobs, editors work with all eight parts of speech - verbs, nouns, pronouns, adverbs, adjectives, prepositions, conjunctions, and interjections - for starters. It gets more complicated from there. Just think about the parts of a verb - base, past tense, and past participle. Do not forget to throw gerunds and infinitives into the mix. Of course, past, present, and future tense have to be taken into consideration as well. Add sentence structure and word choice into the equation, plus tone and voice. Synonyms and antonyms also come into play. Spelling and punctuation do not escape the watchful eye of a careful editor, either. There is also the flow of the story. Does it all make sense? Does it hang together? Are the characters fully developed? These are all things readers are grateful they do not have to worry about because they are taken care of by studious editors before the written word is released for public consumption. Editors are on the front lines of the literary world. The quality of what everybody reads is in their hands and the results of their work are an open book.