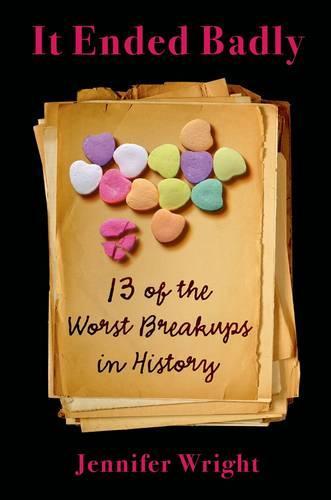 If you are lying in bed right now, a pint of ice cream in one hand, a bottle of scotch in the other, and this book clenched between your teeth (one tooth is missing from last night’s bar fight), with tears streaming down your face over how much you loved, loved, loved your ex, let me commend you on how well you are coping. You could be doing so much worse. So much worse. You could be beheading your ex, or castrating strangers, or starting an exciting new life with a sex doll. You Are A Hero.
In It Ended Badly, New York Observer columnist Jennifer Wright guides you through thirteen of the worst breakups of notable figures in history from Emperor Nero (sadist, murderer several times over), to Viennese artist Oskar Kokoschka (he of the aforementioned sex doll), to Norman Mailer (public stabbing). With her conversational tone and considerable wit, Wright digs deep into the archives to bring these terrible breakups to life. It’s fun, pop history that educates, entertains, and really puts your own bad breakup behavior into perspective.
It Ended Badly is for anyone who’s loved and lost and maybe sent one too many ill-considered, late-night emails to their ex reminding us that no matter how badly we’ve behaved, no one is as bad as Henry VIII.
$9.99Add to basket ›