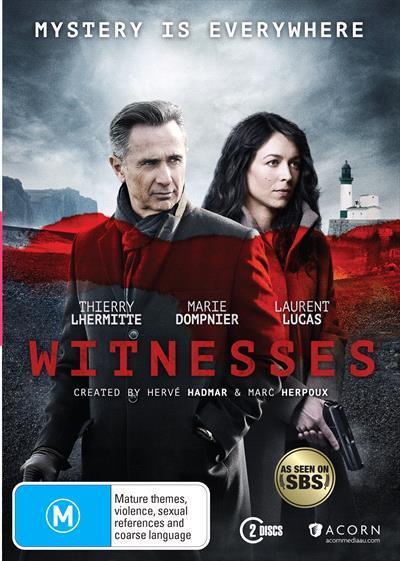 Set in the North of France, The Witnesses turns on a passionate and resilient female cop, Sandra Winckler, who investigates a wave of strange murders linked to Paul Maisonneuve, a Crime Squad legend who is now retired but forced to return to duty. The dead are dug up and are installed in witnesss houses. Each time, the same ritual: a woman, a man, a teenager who did not know each other are placed to form a new family. In the middle of the body, a picture: that of Paul Maisonneuve, a legend of the PJ in the North of the France, retired, and forced to return to the business.
Who digs up these bodies? Who installs them in these control homes and for what reason? Sandra Winckler, young COP investigating must work with Paul Maisonneuve to discover who is behind these grisly stagings. During the investigation, she will have to delve into the past of Paul, because the truth lies there, somewhere in his past. For these two cops, life will soon never be the same… in the shadows, a man is ready to accomplish his revenge, a revenge that has developed over a long time…

With all the excitement and press favouring the new wave of Nordic noir that seems to run in endless supply onto our shelves, it is easy to understand how many wonderful series from other European nations get lost in the flood. A new French crime drama that has just finished its six-part run on SBS is The Witnesses. I’m going to say that this is the best series of its type I have seen in years. As good as Broadchurch, and the equal of all the great series coming out of Scandinavia at present … and in the past!

The Witnesses is set in the north of France in a gloomy small coastal village in Normandy where exhumed bodies of the recently deceased start to show up in display homes, ritualised in perfect family settings. Linking each site is a photo of Paul Maisonneuve, a retired French police force legend. Sandra Winckler is the young cop assigned to the case. Working alongside the returning Maisonneuve she must discover who is behind the gruesome settings whilst also dealing with the secrets and half truths that seem to lead her into dead ends. What is it that links this legend of the police force with these bodies? What is this secret past that links these two police officers? Is there more at play than first thought? All I can say is that you must watch up until the very last scene.

Paul Maisonneuve is played by Thierry Lhermitte, one of France’s great film stars. Sandra Winckler is played by Marie Dompnier, a seasoned stage actress in what is her first major role in front of a camera. Their relationship is one of secrets in which Maisonneuve plays it cool and lets on very little and raw emotion in which Winckler shows her frustration and frailties not only with her ‘new’ partner but with her job and home life. The chemistry between not only these two but with the whole supporting cast makes this superior murder mystery essential viewing. Northern coastal France plays its part and I felt like I needed to rug up just to watch this. I have no doubt that Australia will fall in love with the dark beauty of The Witnesses and of Marie Dompnier who lights up the screen with both her fragility and assuredness. Wonderful!