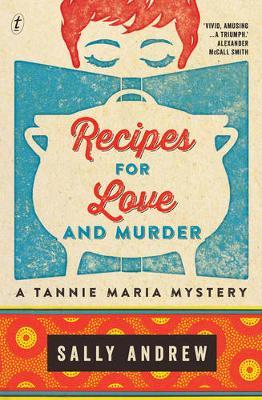 Tannie Maria used to write a recipe column for the Klein Karoo Gazette. Then Head Office decided they wanted an advice column instead, so now she gives advice. In the form of recipes. Because, as she says, she may not know much about love, but food-that’s her life.
Everything has been going well. A tongue-tied mechanic wins his girl with text messages and Welsh rarebit. A frightened teenager gets some much-needed sex ed with her chocolate-coated bananas.
But then there is a letter from Martine, whose husband beats her, and Tannie Maria feels a pang of recognition and dread. This may be a problem that cooking can’t solve…
Warm, funny, poignant: Sally Andrew’s irresistible heroine brings mystery, romance and amazing cooking together in the most entertaining new series in years. And all Tannie Maria’s mouthwatering recipes are right there in the book!
‘If you want a vivid, amusing and immensely enjoyable read about detection (and cooking) in an intriguing part of southern Africa, then this is the book for you. A triumph.’ Alexander McCall Smith
$29.99Add to basket ›