Songs of Love and War 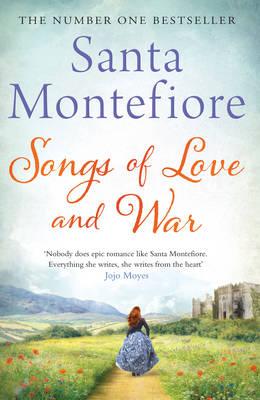 Songs of Love and War

FROM THE NUMBER ONE BESTSELLING AUTHOR Their lives were mapped out ahead of them. But love and war will change everything… West Cork, Ireland, 1900. The year marks the start of a new century, and the birth of three very different women: Kitty Deverill, the flame-haired Anglo-Irish daughter of the castle, Bridie Doyle, the daughter of the Irish cook and Celia Deverill, Kitty’s flamboyant English cousin. Together they grow up in the dreamy grounds of the family’s grand estate, Castle Deverill. Yet their peaceful way of life is threatened when Ireland’s struggle for independence reaches their isolated part of the country. A bastion of British supremacy, the castle itself is in danger of destruction as the war closes in around it, and Kitty, in love with the rebel Jack O'Leary and enflamed by her own sense of patriotism, is torn between loyalty to her Anglo-Irish family and her deep love of Ireland and Jack. Wrenched apart by betrayal, their world turned to ash, the girls' friendship seems all but lost as they are swept to different parts of the globe. Yet, they have one thing in common: a fierce and unwavering longing for Castle Deverill and all the memories contained within it. ***PRAISE FOR SANTA MONTEFIORE*** ‘Nobody does epic romance like Santa Montefiore’ JOJO MOYES ‘An enchanting read overflowing with deliciously poignant moments’ DINAH JEFFERIES on Songs of Love and War ‘Santa Montefiore hits the spot for my like few other writers’ SARRA MANNING ‘One of our personal favourites’ THE TIMES on The Last Secret of the Deverills ‘Accomplished and poetic’ Daily Mail ‘Santa Montefiore is a marvel’ Sunday Express