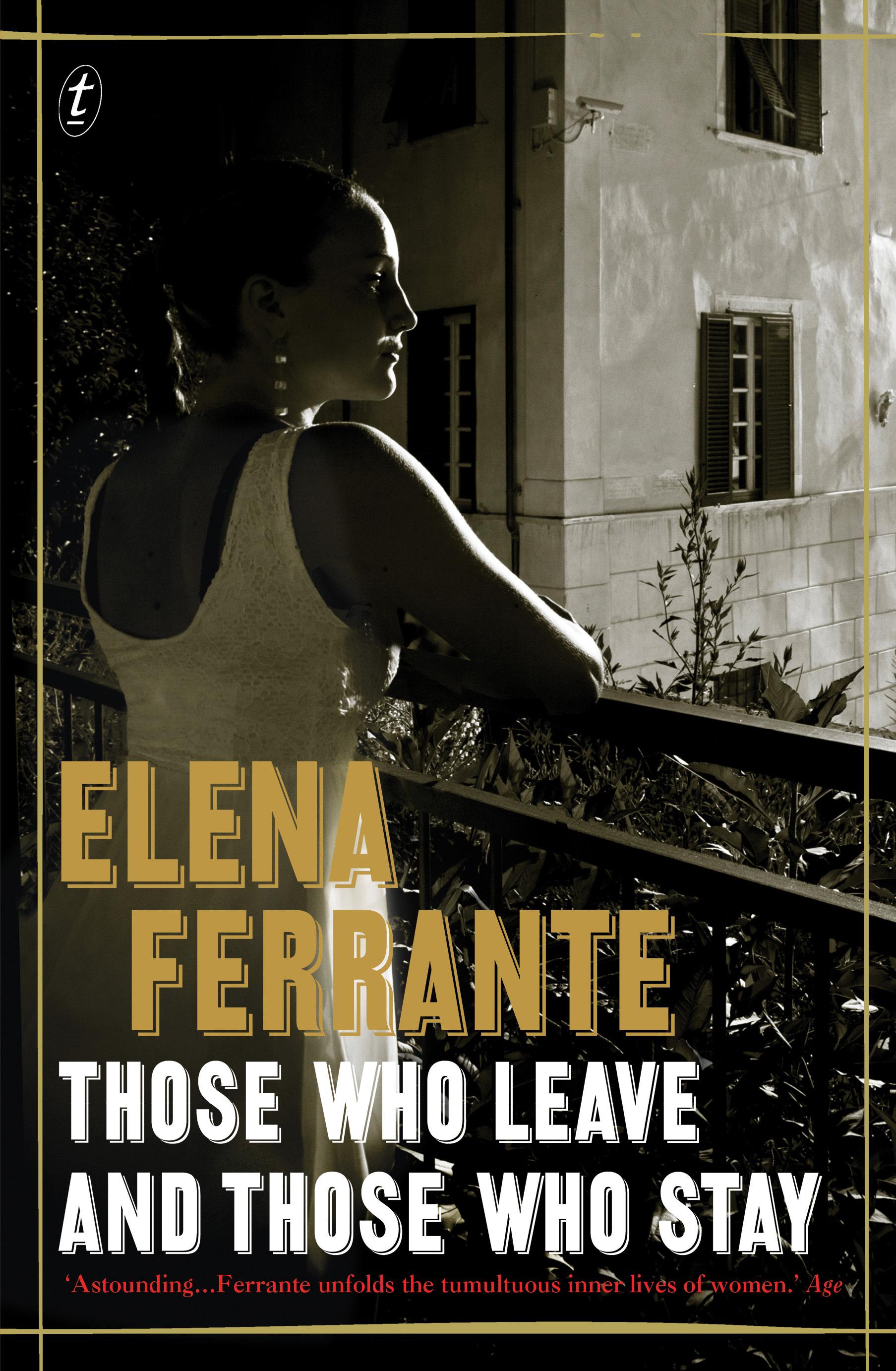 Book three of the Neapolitan Novels
Since the publication of the acclaimed My Brilliant Friend and The Story of A New Name, Elena Ferrante’s reputation has grown enormously. Her novels about the friendship between Lila and Elena, about the mysteries of human relationships, are utterly compelling.
In Those Who Leave and Those Who Stay, the two protagonists are now in their thirties. Lila, married at sixteen, has left her husband and the comforts of her marriage, and has now joined the workforce. Elena has left the neighbourhood in Naples, been to university, and published a successful novel, all of which has brought her into a wealthier, more cultured world. Both women are seizing opportunities to flee a life of poverty, ignorance and submission. Yet they are still very much bound to each other by an unbreakable bond.

Elena Ferrante’s Neapolitan novels are relentless and ferocious, and wholly absorbing. With each new book, the story of Elena Greco and her friend, Lina Cerullo, intensifies, and in Those Who Leave and Those Who Stay the two women are now in the midst of the volatile landscape of late 60s and early 70s Italy. This climate – inhabited by the powerful Solara brothers, members of the infamous Camorra criminal organisation – infiltrates every aspect of the women’s lives. Part of the brilliance of these novels is Ferrante’s ability to portray the simultaneous horror and normalcy of poverty and violence, to entrench the domestic within the political.

Elena is a haunted figure. She’s plagued by her past, one she fears she never truly escaped; by her failures, as a mother, a friend, a writer; and by Lina, whom Elena constantly compares herself with. Early in the first novel, My Brilliant Friend, Elena recognises that she is of a dissimilar disposition to Lina, but understands that her traits (obedient, hard-working, docile) are deserving of praise while Lina’s (charismatic, wilful, talented) attract punishment. In many ways, Elena is only ever capable of viewing herself in relation to Lina, and as one (particularly odious) character cruelly jokes to Elena, ‘In my opinion you and Lina made a secret agreement: she does nasty things and you write them.’

However, as both their lives progress, it’s clear that neither has a true advantage. Lina is deprived of education and sentenced to a life of limitations, yet her sharp intelligence still wins her the respect and love of the ones Elena admires. Elena has access to education, art and culture, yet finds herself deeply unhappy in marriage, unable to communicate her desire to her husband. (Ferrante’s candid accounts of sexual relations between characters are precisely wrought.) Indeed, on discovering feminist theories, Elena comes to believe she has done everything wrong. As her sister-in-law says to her in sympathy, ‘You’re really a good girl, poor you.’ Towards the end of Those Who Leave and Those Who Stay, Elena rebels against this reputation and her actions cause ripples that remain uncharted. No doubt, the full impact will be revealed in the next novel.

No other author has ever captured my imagination in quite the same way as Ferrante, who is effortlessly able to destabilise and dismantle my notions of self through her characters. In this series of novels, Ferrante has created something astonishing and exceptional.

Bronte Coates is the Digital Content Coordinator and Editorial Assistant for Readings Monthly. She is a co-founder of literary project, Stilts.

Since the publication of the acclaimed My Brilliant Friend and The Story of A New Name, Elena Ferrante's reputation has grown enormously. Her novels about the friendship between Lila and Elena, about the...

The Story of a New Name

The sequel to My Brilliant Friend, The Story of a New Name continues the enthralling chronicle of a friendship that is obsessive, loving, complicated, hurtful, enduring and constantly startling. It is an...

A memorable portrait of two women, My Brilliant Friend is also the story of a nation. Through the lives of Elena and Lila, Ferrante gives her readers the story of a city and a country undergoing momentous change.