The Invisible Man from Salem: A Leo Junker case 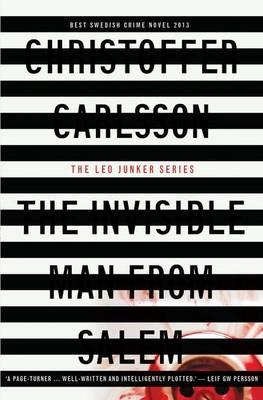 The Invisible Man from Salem: A Leo Junker case

A bestselling and award-winning first volume in a trilogy by Sweden’s leading noir crime novelist, starring a troubled police officer called Leo Junker.
In the final days of summer in 2013, a young woman is shot dead in her apartment. Three floors above, the blue lights of the police cars awaken Leo Junker, a longtime police officer. Leo works in the Internal Affairs division as the lowliest form of officer - a spy. Leo is even lower, however, having been suspended after committing a terrible mistake. In what became known as the ‘Gotland Affair’, a police officer was accidentally killed, and Leo was found holding the offending weapon.
But he wants to help on this case, despite being on mandatory leave, because this woman has connections to people from his past. Now, in the backstreets, shadowed alleyways, and decaying suburbs of Stockholm’s underground, the search for the young woman’s killer - and the truth of the Gotland Affair - begins.

Similar in tone to last year’s hit The Truth About the Harry Quebert Affair (both books were written by authors young enough to fill this reviewer with some jealousy), The Invisible Man from Salem has a skilled yet youthful feel to it that never detracts from an unnerving and deadly tale. Suspended police officer Leo Junker is spending his days feeling increasingly bitter and abusing a variety of substances when a murder takes place right at the bottom of his building – a young woman is shot cleanly in the head and left on her bed with a necklace in her hand. And while he has no idea who the woman is, the necklace she holds is something entirely familiar – and it takes Leo back to his tumultuous teenage years and a splintered friendship that ended in tragedy.

Junker is an enthralling character to follow – rightly angry at the organisation that threw him to the wolves, but desperate to be back there and doing something, anything, but hanging out in his favourite bar and going on uncomfortable visits back to his family in Salem, the town he left behind. The dead woman on the bottom floor put the spotlight on him – again – but revisiting his damaged past may not do anything but cause him pain, especially when Junker is seemingly more at home surrounded by obviously dubious types than the moral people who continue to let him down. This is a gripping and highly enjoyable read with the kind of unreliable hero you can’t help but follow desperately, excitedly around.