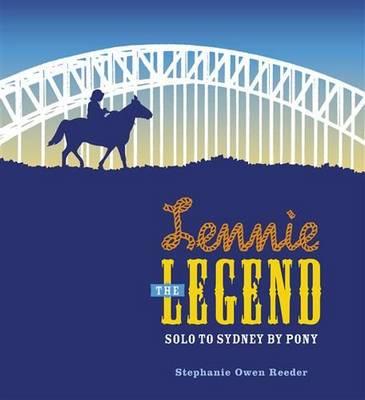 CBCA Book of the Year Award Winner (Eve Pownall Award for Information Books) 2016
This is the inspiring true story of nine-year-old Lennie Gwyther who, at the height of the Great Depression in 1932, rode his pony from his home town of Leongatha in rural Victoria to Sydney to witness the opening of the Sydney Harbour Bridge. Lennie’s 1,000-kilometre solo journey captured the imagination of the nation, and his determination and courage provided hope to many at a difficult time in Australia’s history.
Lennie the Legend begins with a terrible accident on the family farm, when Lennie, remarkably at such a young age, takes on the responsibility for the ploughing. Lennie is obsessed with the marvel of the Sydney Harbour Bridge and, as a reward for saving the farm from missing the planting season, his parents grant him his wish to ride on his own to Sydney for the opening of the bridge. Lennie has all sorts of adventures along the way - a thief lurking in the bush in the dead of night, a raging bushfire, surprise appearances, celebrations in his honour, being the star of a newsreel, and meeting the Prime Minister.
$24.99Add to basket ›

Winners of the CBCA Book of the Year Awards 2016

END_OF_DOCUMENT_TOKEN_TO_BE_REPLACED

The Forgotten Rebels of Eureka is the most talked-about work of Australian history in recent years. Now here is Clare Wright's groundbreaking, award-winning study of the women who made the rebellion in an abridged edition for...

The new Australian go-to book for parents wanting help with THAT talk... It's one of the most amazing stories ever told - and it's true! Funny, frank and embarrassment-free, The Amazing True Story of How Babies are Made gives a...

The stunningly illustrated true story of the Phasmid and its remarkable journey back from extinction.

END_OF_DOCUMENT_TOKEN_TO_BE_REPLACED

Australian Kids through the Years